Posted on September 9, 2014 by Stephanie Silber

This blog title was Vic’s idea.  He knew I was struggling with the writer’s curse: lack of initiative, lack of inspiration, and an unhealthy dollop of depression.

“Just take it from the song title and go from there,” he told me.

Of course, it’s the old Olivia Newton-John song, MAGIC.  Cheesy and dated now, but back then it felt ethereal and deeply meaningful for us.

It was the summer of 1980.  Vic and I had hit the road, as we followed the Philadelphia Phillies’ farm club, the Reading Phillies, shooting Vic’s first directorial effort, CHASING A DREAM.

A heady time it was, too, especially for a baseball novice like me, in a young relationship with a life-long sports fanatic.  We road-tripped from Reading, PA, to Bristol, CT, Westhaven, Waterbury, back to Reading, trailing the team bus, with Newton-John’s MAGIC blasting from the car radio.  The ballparks were small, the outfields verdant.  The evenings were soft and long. 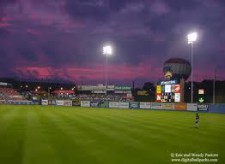 The light was golden and the crack of a bat connecting with a ball was a heart-pounding thrill.  It was a perfect way to discover America’s pastime.

Certainly, this ball club was a team touched by baseball’s potent brand of magic.  With a line-up that featured superstars-to-be Mark Davis, Ryne Sandberg, Ozzie Virgil, and Bob Dernier, they were rich in talent 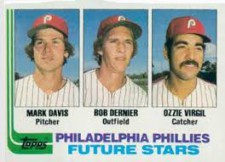 and they were hungry.  At home and on the road, we savored the experience of this quintessential slice of the American pie, from the groupies and the glory to the endless bus rides, cheap motels, and dingy locker rooms.  The wives had plenty to say, too.  This was not an easy life for them; little money, no guarantees.

It seems like a dream to me now.  I was running around with a clipboard, collecting signatures for release forms, lugging and minding the equipment bags, soaking it all in, feeling as fully alive as perhaps I ever had.  I was discovering what it meant to make a film.  To document experience.  To capture an essence.  I was just a PA, but it was utterly

fulfilling to me, as the medium brought to bear all of my skill sets, all of my passions, from the visual element (I was oil painting in those days), to the human interaction, with its inherent drama, to the construction and telling of stories.

I was falling in love, on so many levels I was giddy with it. 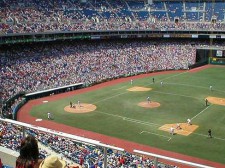 At season’s end, Mark Davis, the lefty hurler, Virgil, the prankster catcher, and the fast and scrappy Bobby Dernier were called up to the big leagues.  They’d done it.  They made it to The Show.

That year, the Philadelphia Phillies won the World Series.  You cannot make this stuff up — truth really is stranger than fiction.  It was all captured on film.  The result 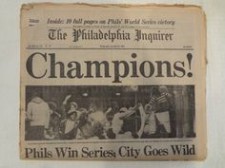 was raw, it was evocative, it was truthful.  It was the beginning of both my career and Vic’s.  We’ve never stopped chasing our dreams, sometimes to our detriment, but always with full hearts and unabashed passion.  We married the following year, and have been blessed with a love that only grows deeper, and work that sustains us, despite struggle and hardship.  We have never given up.  Nothing can stand in our way.