Posted on October 1, 2014 by Stephanie Silber

We stayed up well past our bedtime last Saturday night.  We’d turned out for Black 47’s last show at Connolly’s, New York City headquarters for over 15 years to that peripatetic band.  Though we’ll attend the “final show ever” at B.B. King’s on November 15th, the occasion was nevertheless bittersweet.

I remember well the first Black 47 gig we attended at Paddy Reilly’s in May of ’94.  The 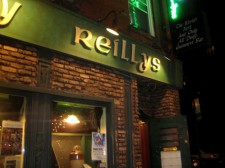 band, founded by Irish born frontman and songwriter Larry Kirwan, along with then-Brooklyn cop Chris Byrne, had exploded onto the music scene in 1989, capturing the hearts and imagination of an ever growing and wildly mixed-bag fan base.  To say that the Black 47 live experience was a dizzying and all-encompassing Bacchanalia would be putting it mildly. 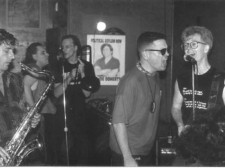 Fists pump the air as the music surges.  The place is on fire.  Hipsters, cops and firemen, suburbanites, socialites and the odd celebrity, shout in exuberant unison along with the lyric.  “My name is James Connolly / I didn’t come here to die / but to fight for the rights of the working man…”  It’s a slice of Irish history, Black 47 style, delivered as only Larry Kirwan can.

Says Kirwan, “In the early 90’s we set out to give a voice to the whole nationalist population in the north of Ireland.  They were so down at the time.  What we were trying to do was wake people up.”

Wake people up they did.  The Black 47 narrative is not solely a story about a band, or even the man who drives it.  It’s a story about politics.  Irish politics, American politics, the politics of the music business, and most importantly, the politics of love and freedom.  Indeed, the band’s name is derived from the worst year of the Irish potato famine.  In the end, for Larry Kirwan, politics is his life’s work, and poetry a means to convey his eloquent message.  Don’t make the mistake of thinking about Black 47 as an “Irish band.”  They’re anything but, as many a tavern owner on Bainbridge Avenue in the Bronx would attest to, back in the band’s early days.  The unique New York City/Irish nexus is the bedrock of their music.

“Take all the sounds you hear in New York; the hip-hop, the reggae, the noise in the East Village.  Put ’em together in a big melange and this is Black 47,” comments Kirwan.

Long ago, the band was informed by an alternative radio station that their sound was “too alternative to be alternative.”  Maybe.  But in spite of the vagaries of a fickle business, the group did have its fifteen minutes — and it stretched that into twenty-five years.  Theirs is a story of survival.

Other than the venue, last Saturday night differed little from that May of ’94 at Paddy 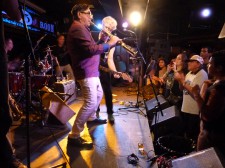 Reilly’s.  Personnel has shifted a bit, and many more songs are to be found in the canon, but the band’s dynamic, the energy, and the message remain the same.  Time collapsed.  The packed house rocked in place.  Fred Parcell’s trombone interlocked seamlessly with Geoff Blythe’s wailing sax.  Thomas “Hammy” Hamlin pounded the skins as if there would be no tomorrow, with Joseph “Bearclaw” Burcaw providing a robust bass line, while Joe Mulvanerty’s uilleann pipes skirled madly.  Kirwan, resplendent in his trademark green suede shoes, has lost none of his nimble footwork and passionate delivery. 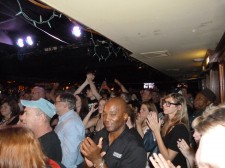 I might have wept, but I was too busy dancing like a dervish.  I confess, however, that the tears sprang to my eyes and my throat closed up a little as the applause roared on and on, after the calls for more, and still more, had been satisfied.

Thanks, Black 47.  We were lucky to have had twenty-five years with you.  And I think it would not be hyperbolic to say the world is a better place because of your contribution to it.