It took fifteen years to make EVERYTHING IS FOREVER.  So what’s another thirty hours out of my life to fly from New York to Croatia to screen the film at a festival?  One word: Hell.  Just for starters, airport food sucks.  Just try eating breakfast, lunch, supper, and snacks in a variety of airports.  A gastronomical nightmare.

Tired and sick to my stomach, I arrived in Starigrad Paklenica a bit of a broken man, though anticipation was beginning to build: I would finally see the film play in my documentary subject Nenad Bach’s homeland.  After a quick meet-up with the festival director, Admir, Nenad and I drove to our lodging.  He took me to a room that had one large bed and hardly any space to open my suitcase.  Not exactly the Taj Mahal.  I realize that I am a low-budget indie producer, but in my exhaustion I was wondering if this trip might be a mistake.

I dropped like a log into the bed, clutching my tiny corner, as I have to admit I prefer sleeping with my wife rather than the subject of my movie.

The next morning things started to improve, as we were served a beautiful egg by our 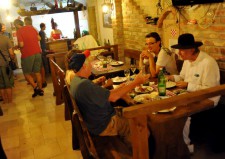 hosts.  The color of the yolk was one I have never seen before, and I mean that in a good way.  Very tasty.

The hosts then showed us to a better room, equipped with two double beds, a bathroom, and a kitchen.  This will be my home for the next week and I feel like a new man.

The festival suffered from the usual dysfunction found at many such fests; you’ve got your communications breakdowns, attendees scrambling for lodging, and the confusion that ensues when things don’t happen as planned, but that’s all part of the vibe. 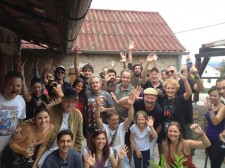 that are showing, but includes the quality of the filmmakers themselves, as artists and compassionate, like-minded souls.  The Starigrad Paklenica Festival overflowed with such people.  Nenad and I made wonderful new friends from Ireland, Germany, Portugal, The Netherlands, and the U.S.

The days were activity packed.  We had press conferences in the mornings, to allow the filmmakers to talk about and promote their films, which would screen in the evening.  There were master classes where we had the opportunity to learn about other filmmakers’ experiences. 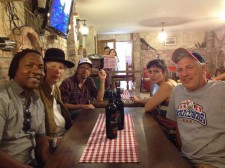 At midday the festival provided a complimentary lunch, which was served in a Rathskeller type setting.  The camaraderie flowed like the wine. 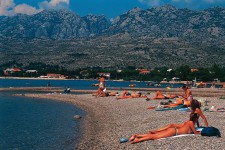 screenings in one of the many rugged canyons of the region.  Nenad deserves a nod of appreciation for his stellar driving, as it was treacherous going up the narrow mountain roads in the dark.

All screenings, being out of doors, were at the mercy of the gods.  The night EVERYTHING IS FOREVER was to be screened, a brisk wind kicked up and the tech guys debated whether to cancel the screening for fear the large screen would blow down.  Luckily Nenad was able to convince the crew to take a chance and go for it. 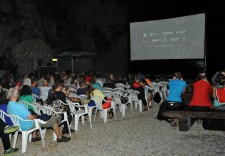 I myself was getting comfortably numb on Rakija, a potent alcoholic beverage made from a variety of fruits.  The film began, and the wind gusted.  Twenty minutes in, the screen rocked and tilted forward about halfway down.  OK, I thought, with no little dismay.  We’re doomed.  But right on the heels of that thought, the screen snapped back into place, and barely wavered again.

As the credits rolled, the full house burst into applause.  Our host, Masa, was an exuberant moderator for the Q&A.  I relaxed, relieved and quietly jubilant, knowing once 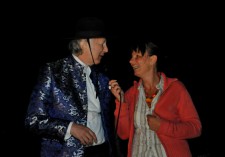 again that the film would touch people in a very special and individual way.

The following morning, the daughter of our lodging hosts thanked me for giving a voice to her people.  Though it is really Nenad who carries a passionate torch for the culture of Croatia and for freedom, I accepted the compliment with great pleasure.

Mother Nature was not as kind to the filmmakers who were to screen the next night.  Our new friend Lars had traveled from Germany accompanied by his little girl, and seeing her cry when his screening was canceled was heart wrenching; Lars would have to depart the next morning at daybreak.

But we, his new band of brothers, assured him that we would gather the next day and screen his film.  We kept that promise. 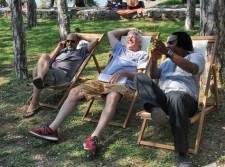 The next night, the last of the festival, we were at a screening during the closing ceremonies.  By the time we made our way to the canyon where the event was held, it was over.  But we learned that we had won a Special Jury Award for Multiculturalism and Peace, a happy surprise.

The Starigrad Paklenica Festival was the experience of a lifetime, and I’ll always think fondly of my new family of international filmmakers.  Below are the outstanding films I saw, and Reader, I hope you can track them down.  A visit to the film websites would be well worth your time.