OTHER PEOPLE’S HOUSES: An Excerpt 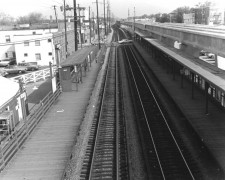 I go to an Allman Brothers concert with Rocky.  It is at the Fillmore.  We take the train in.  I stare out the window at the rows of identical houses rushing by, thinking in terror that I must take myself with myself, no matter where I go.  I am a statistic now, a statistic and a cliche.  It feels like watching a car wreck happen slowly in a dream.

It’s a Saturday, and St. Mark’s Place is teeming.  The  head shops that line the street emit a pungent funk of patchouli and strawberry incense every time someone goes in or out.  A black guy with a tall ‘fro mumbles at us as he passes, threadbare dashiki fluttering about his skinny frame.

He opens his hand and I get a second’s glimpse of what appears to be several baby aspirins before he closes it again.  He wears no coat, and I turn to watch him go.  Isn’t he cold?

The sun is bright and high but it is so cold out it hurts my teeth when I breathe.  Rocky 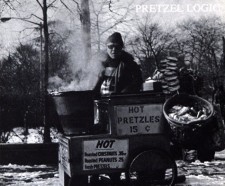 buys me a hot pretzel from a vendor.  The smoke from his cart wafts skyward lazily.

“So, you know I’m pregnant,” I tell Rocky casually.

Rocky does a broad double take.  I laugh.

I hug myself with both arms, jigging from foot to foot on the street corner, my silence answer enough.  We have hours to kill before the show.

Rocky puts his arm around me.  A bearded guy in army fatigues is yelling at a woman on the street.  A little boy watches them from the stoop of a brownstone.  He is crying in hicketing sniffles.  His nose runs like a faucet.  He is wearing too-short bellbottoms and sandals with no socks.

Rocky asks, “What are you gonna do?”

I shrug, shaking my head.  There’s nothing to say.  The bearded guy spits at the woman and swings off down the street, bumping into people as he goes.

“Peace,” the woman calls after him.  And in a conversational tone, “Asshole.”

Her hair is long and frayed at the edges.  After a minute she picks up the little boy and disappears into the building.  I wonder what their life is like.

We walk under the arch into Washington Square Park.  A thin, gruel-colored crust of snow still covers the lawns, but the walking paths are icy slush.  A couple of cops pass us.  They are both young.  The good-looking one catches my eye, winks.

I smile at him, and quickly look away.  The policeman is your friend, we learned in kindergarten.  Now they call cops pigs.  They are the sworn enemy, not to be trusted, like people over thirty, like your parents.  My father is a cop.  It is everything he never wanted to be. 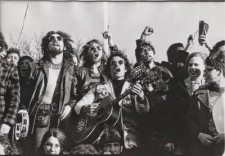 A small crowd has gathered up ahead.  People are holding signs aloft.  Some guy is making a speech, in a high voice that cracks when he emphasizes a point.  His untidy frizzy hair bobs with every exclamation.  Something about a collective lie.

The crowd shuffles, forms itself into a ragged line, and begins to move.  They are mostly kids, not much older than we are, but they have an alluring city-ness about them.  The front marchers link arms.

It is not immediately clear what the specific beef is about.  More troops to Southeast Asia, guardsmen shooting students,  it’s always something.  The signs say simply, “Stop the War,” or “WAR IS OVER (if you want it)”.  Stuff like that.

Standing in the cold, clear-headed, needing to pee, slightly queasy, the marcher’s fervor seems suspect to me all at once.  They’re just spoiling for a fight themselves, I think suddenly.  I watch them go, ninety or a hundred strong.  I feel contemptuous.  I can’t help but notice that many of them sport fashionable combat boots, Doc Martens in fine repair.

“Well-shod,” I tell Rocky, not expecting him to understand.

The Fillmore is packed for the eleven-o’clock show.  We have pretty good seats in the 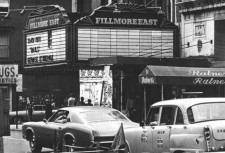 upper mezzanine.  Our coats bunch uncomfortably behind us in our seats.  The theatre is close and smoky.  I feel terribly sleepy and full.  Rocky is pumped, getting up at intervals to whistle shrilly and clap some, by way of encouragement for the headliners.  A fat guy behind him keeps yelling, “Siddown!”  I personally wish he would stop clapping in my ear, but because I love him and he is happy, I keep it to myself. 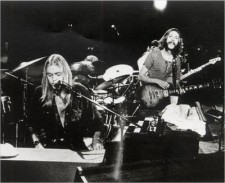 The Allman Brothers take the stage at last.  The crowded house goes nuts.  Now everybody is up.  Duane Allman’s famous licks curl through the air, as high and sweet as birdsong.  Rocky screams, exultant.

I can’t stand up.  My body feels too heavy.  All I can see are moving backs.  I am hunched in a forest of swaying, grooving bodies, lost and still.  My eyes are scratchy, and the lids are heavy.  My head drops to my chest.  I sleep deeply.

Rocky is shaking me and laughing.  “You slept through the entire thing!” he is saying, incredulous.  He turns to the fat guy behind us, who is shrugging into his pea jacket.  “She slept through the whole fuckin’ thing, man!”

The fat guy looks at me without interest and shakes his head sadly back and forth.  “Her loss, my man,” he says.

The Allman Brothers are gone.  The roadies work the lit stage.  The smoke in the auditorium is heavy enough to chew.  My mouth tastes like a sandbox.  It’s time to go.

In the lobby I kick a Marlboro box out from underfoot, and Rocky quicksteps in to pick it 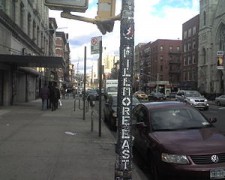 up.  He’s out of smokes and hopes for a freebie, and — windfall! — a fat joint is nestled in the otherwise empty box.  The streets are quiet.  It is very late.  Rocky lights up, inhales deep.

He offers me the joint and I take it, inhale, realize that oh-shit-I’m-pregnant, spit out my hit, and then deliberately, fuck it, take another, and I am high and calm in the winter night.

6 Responses to OTHER PEOPLE’S HOUSES: An Excerpt