RANDOM LUNACY IN THE INDIE TRENCHES

Posted on December 19, 2012 by Stephanie Silber

We just learned this morning that our film, RANDOM LUNACY: videos from the road less traveled, has been dropped from HULU, where it had enjoyed a two-year run, and boasted roughly 90,000 views. 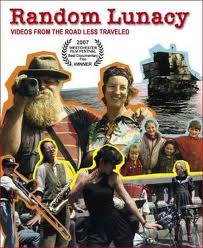 It had been in good company, including EXIT THROUGH THE GIFT SHOP, a “Banksy” film; Mark Cuban and Graydon Carter’s SURFWISE, which explored similar themes but had a wheelbarrow full of cash behind it; and SUPERSIZE ME, the Morgan Spurlock documentary.

It’s depressing. Comes with the territory, and that’s why I am compelled to write about it. I just told Vic that RANDOM LUNACY, unlike ourselves, will never get old. The doc was cobbled together from home movie footage that our subject, Poppa Neutrino, shot with his family throughout twenty years of living homeless by choice on the streets of the world, conjoined with our own footage. Not to mention our blood, sweat, tears and a whole lot of heart. It’s a perennial, I assured Vic. It was never a particularly fashionable film, never au courant. Not gonna be the flavor of the week. Be proud, I said. Be very proud. Fashion wasn’t what we were going for. In fact, fashion is the antithesis of the Neutrino philosophy. We pared it down to the basics — tell a story, tell it well. Poppa Neutrino would have wanted it that way.