AND I DREAMED I WAS FLYING

Posted on December 11, 2012 by Stephanie Silber

I often refer, albeit privately, to Home Team’s Corporate Headquarters as a garret. It’s on the third floor of our cottage, two rooms in a finished attic.

Once upon a time, it was my “room of one’s own.” It felt like a tree house — in summer, as I worked, I would watch birds and squirrels frolic outside the window, high in the verdant branches of the treetops. My room was spare, but for an easy chair, and my books and pictures and everyday treasures; a starfish shell, a fragment from the demolished Berlin Wall, a heart-shaped chip of rock from the Holy Sepulchre. These were gifts. 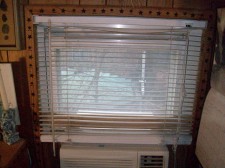 The second room became a sitting room, where Vic watched sports and more sports, where we all watched movies and more movies.

Then, in the late nineties, we took a leap of faith, partnered up, Vic and I, and created our own company. We moved an Avid editing system into my room, which became our room; that edit system is obsolete now, but it still fills the tiny space. I remember working at my desk, Vic behind me, making magic on that Avid, pulling stories out of it as if conjured ex nihilo. People were often surprised that we, as spouses, could work together. That surprised me. Because here in this treehouse, together we could fly. 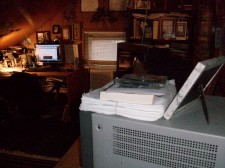 These days, there’s a new Avid system, all streamlined flatscreens. It’s in the sitting room, which is still used for sitting (and in Vic’s case, lying down), in the evening and on weekends. Vic is editing a feature doc there during working hours. And except for the chunky old equipment, my room is my own again. I wrote both my novels and many of my short stories alone in this room, typing almost as fast as I can think, spilling words, pausing to gaze out my window at the green of summer or barren branches bending under the weight of snow. I continue to write here. To what end, I wonder sometimes. No. I wonder often.

So I was pleased to have a night out last Friday. New York City at Christmastime lifted my spirits a treat, despite a persistent light rain falling, and me all gussied up for the Irish American Writers and Artists salon, a gathering that I look forward to always with confident anticipation. This one would be different, though. Instead of meeting at the cell theatre in Chelsea, or the Thalia Cafe on the upper West Side, we were to be guests of the Consul General of Ireland, Noel Kilkenny, and his gracious wife, Mrs. Hanora O’Dea Kilkenny, and what a dazzling evening it was!

The residence is high in the sky and the lights of the city sparkled like an infinity of stars. Very high places have a seductive way of allowing day-to-day reality to dwindle, to bring us closer to the gods and make anything seem possible, our troubles remote. How glamorous we all were that special evening, how shades of Scott Fitzgerald!

The presenters were, as always, exemplary. The storyteller, the songwriter, the poet, and the singer — Honor Molloy, Michael Sheahan, Connie Roberts, Niamh Hyland — wowed the room. Charles R. Hale, brilliant moderator and longtime member of IAW&A, outdid himself, as if such a thing were possible.

Writer Peter Quinn closed out the evening, speaking informally and charmingly. He enthused about the wealth of talent at IAW&A salons. He pointed out that whether published or unpublished, a writer is simply one who doesn’t give up. Keep at it, he told us. It’s all about the work in the end.

And that’s exactly what I needed to hear that night.