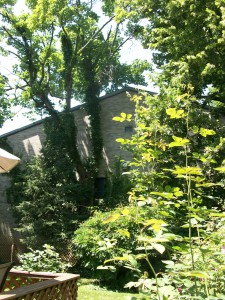 The tree guy showed up at 9 AM exactly, as he’d promised.  A big man with a basso profundo voice, he got right down to business, and he didn’t mince words.  My beloved old maple in the back yard, the one that has shaded the perennial garden that I built from scratch around a half-dozen scraggly rose bushes (now thriving, and joined by others) has reached the end of the line.  I’ve felt it coming.  Its upper branches have been dying off for several years, and it’s pitted with deep scars.  Mold has formed around the base of its trunk.  While not as venerable as the trees taken out on the neighboring church grounds, it has been an imposing presence in the back of the garden long before we arrived, some twenty years ago.  I’d have wished it to remain long after we have gone.  That is not to be.

Furthermore, the tree guy informed us, the gorgeous Japanese maple in a side border is likewise in poor health, but with an application of fertilizer, may give us its blazing canopy for ten or more summers.  MAY.  I think of the implications of those ten more summers that lie ahead, or not.

A powerful and disconcerting momento mori.

They arrive on an eerily dark Thursday morning, six men in helmets and orange vests. 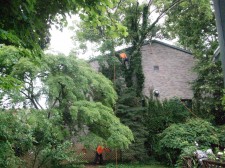 For a time they move from truck to back garden, milling, pointing, conferring.  Before too long there are cables up.  One of the men crosses my anxious line of sight carrying a huge saw.  I shudder.  Then I close the windows, though I know I’ll hear the saw.  What I don’t expect is the explosive sound of the impact as the branches fall.  The cats have scattered in fright.  Now, the droning roar of the woodchipper as it grinds my maple into fragments and dust.  I feel sick to my stomach. 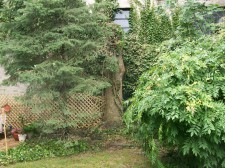 Early on in our tenure here, in a century-and-a-half old cottage on what was once a quiet lane, we were advised by a tree expert to “get rid” of the maple.  The thought was unbearable, in part because it masked somewhat the hulking old gym building which belongs to the church/school complex abutting our home.  A gardener I admired told me at the time that some people create totems from what’s left of a felled tree, and though this comforted me, I had no intention whatsoever of taking out the maple.  And so it stood, as it had for years before we came, and for the last twenty, as ivy grew thick upon the walls of the gym.  Of course, the ivy wasn’t under our control; once the church caretakers ripped it down.  It grew again.  Then Hurricane Sandy wreaked her havoc on it.  It’s growing again.  I’m grateful for that.  But I’ve learned I have little say in the fate of trees and ivy. 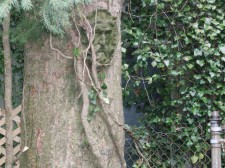 a natural object or animal believed by a particular society to have a spiritual significance and adopted by it as an emblem.

The maple’s trunk is beautiful, despite those deep scars in places.  Its bark is lined with intricate whorls.  Tough vines embrace it.  Soon after moving into the cottage, 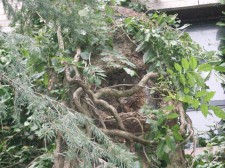 I’d found a stone head in a junk shop.  I think of it as the god of wind.  I hung it on the tree for decoration and protection.  Many winds and many driving rains and heavy snows and ice storms came and went, and the maple stood tall.  Its face of stone looked impassively upon the garden.  Goodbye, dear maple.  I think I’ll have a totem.