ODE TO A FAMILIAR

Posted on November 7, 2014 by Stephanie Silber

In the beginning there was Tom, though we wouldn’t know his name until later.  He was rarely seen at first, but his cries in the night, both amorous and territorial, were frequent.  He moved like a phantom, a swift shadow.  Now you see him, now you don’t.  The glimpse he’d sometimes allow left an impression of size, a black and glossy coat, and enormous grace.  That was barely the half of it.

It was clear, though, that he was directly responsible for a kitten festival that late spring of 2012.  Vic called me and Jake to the kitchen window, wordless, pointing.  The morning sun was dazzling.  Three kittens tussled and pranced on the lawn around the birdbath.  The mother cat was lounging on the bench under the wisteria arbor.  We called her Mommie, and a very good mommy she was.

In midsummer, a slight white cat with gray markings showed up.  She was little more than a kitten herself.  We called her Feral Anne, and she made herself right at home on the back deck and in the garden.  She took frequent meals of kibbles there, and it wasn’t long before she brought a kitten around.  Feral Anne sat in the center of the lawn, giving us her profile, and it was then that I spotted a tiny six-week old kitten cowering beneath the deck, a deep gray beauty with a distinctive blaze on her nose.  It took me a minute, but then I understood.

I swear she smiled, raising her head high with pride.  That was the last we saw of the kitten for awhile, though Feral Anne came regularly to take her meals with us, and we often spotted Mommie and her three.  There were even more cats now, a feral colony had sprung up behind the houses on our little block.  All of the neighbors were feeding them, we learned; one of those neighbors was particularly devoted.  She fed them in the pre-dawn hours and in the evening, hand-cooking rice and chicken, a classic “cat lady,” in the best possible way.  She had names for all of them, perhaps a dozen or more, and it was she who named the patriarch Tom.

And then Tom started showing himself more often.  He was a splendid animal, elegant and

supple.  His emerald eyes would fix and hold on you; they were full of almost human wisdom, insight.  Anthropomorphizing?  Perhaps.  But if you saw him for yourself you would agree.  All the neighbors did.  He looked like the sort of cat who would commune with the Wise Women through the ages.  In fact, the “cat lady” (whose name is Pyr), put me in mind of those Wise Women, with her long flowing hair and her lovely face and kohl-rimmed eyes.  Something magical was in the air.

That magic was disrupted suddenly and tragically.  We hadn’t seen our Feral Anne in days.  There was a vacuum where she’d been, and I think we knew the worst before Pyr told us.  She’d been struck and killed by a car.  Pyr had found and buried Feral behind her own house, near the river, with all the other critters she’d cared for over the years and mourned, as we did poor Feral Anne.  The end of summer was almost upon us. 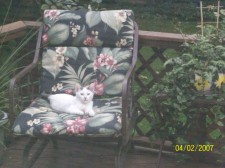 But new surprises lay ahead.  We saw the white kitten first.  She had a Siamese cast of face, and her gaze spoke to her intelligence and soul; it was clear who had bequeathed her that, though her eyes were golden rather than green.  And though her look was regal, she was a sassy thing; the gray markings atop her head resembled a floppy bow, which suited her.

She’d perch on a branch, dangling both paws, staring at us, each day coming a little closer, and then finally, right up to the deck to eat on a regular basis.  In short order she brought her sibling along; the  very kitten that Feral Anne had introduced us to earlier in the summer, the one with the distinctive blaze on her nose.  They were Feral Anne’s babies, and every morning they arrived as soon as they sensed movement from our house, the larger white kitten leading the way, her little sibling in tow, always single file and with their tails hoisted as tall as the mast on a boat.

We called the bold one Sugarman (until, that is, we learned that Sugarman was female; then she became simply “Sugar”), and the smaller counterpart was dubbed “Shy Ronnie,” for her retiring personality.

Gradually, they began to make themselves at home on the back deck, taking long luxuriant 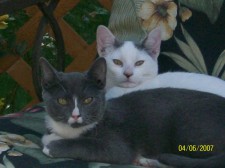 naps on the deck chairs.  One hot day I held open the back door for Sugarman, who strolled through the cool recesses of our ground floor, glancing from side to side, unafraid and curious, and I could almost read her thought balloon as she reached the stairway in the front hall, gazing up.  “We’ll take it,” the balloon stated plainly.  She didn’t even need to see the upstairs, she just sashayed back through the house and out to the garden again, no doubt to share her findings with Shy Ronnie.

“We should get them,” declared my son, Jake.  He is grown now, and no longer lives at home, but he was fascinated by the kittens, and worried for their safety. 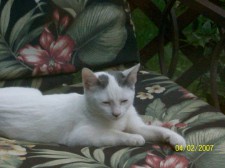 I agreed with him in theory, although we had our hands full enough already with two geriatric cats.  But despite what my heart was telling me, I informed Jake that it was impossible, that the kittens were wild creatures, and would not take well to capture.

In the meantime, my next-door neighbors had rescued Mommie and her kittens, and taken in the kittens to join their own two senior cats.  Mommie was disinclined to go inside, but was a fixture in their backyard, with a kitty condo for her comfort.  “FIVE CATS,” said my neighbor Joe, holding up five fingers by way of emphasis.  “FIVE!”

Of course, inevitably my heart won out.  In the end, with the help of Pyr, Feral Anne’s kittens were rescued, and moved into our home just days before Hurricane Sandy struck.

They settled in well, Sugar and Shy Ronnie, adapting to our inside cats, to indoor life itself.  They were pleased as punch.  They ate well and played well, and showed each other a deep affection we felt privileged to witness on a daily basis.  They knew they were indoor cats now, instinctively, and were glad of it.  They never looked back.

Tom began to appear even more frequently.  He looked a little the worse for wear now, he was limping, and he’d had some injury to that fluffy tail, which hung at a strange, unnatural angle.

The kittens caught on to his visits.  They sensed his presence outdoors, and he would spot them in the window.  His eyes conveyed his gladness for their safety with thrilling eloquence.  He knew we’d taken his progeny in, and for that he graced us with his beautiful green smile, because he also knew well the daily dangers found in the life of a wild cat.

At length, those dangers would claim Tom.  Recently he went missing for weeks, and we feared the worst.  When he finally reappeared, he was shockingly skinny, and the luster had left his eyes.  The prognosis was not good.  Kidney disease was likely, the kindly vet said.  And the quotidian battering that marks the life of an outdoor cat is exponential.

My neighbors, who had become his primary protectors, kept vigil.  He remained with them in the kitty condo which had carried him to the vet.  He died in no apparent pain, in his sleep, a week ago.  A valiant spirit had touched us, and left us all in awe and grief.

The night after Tom died, he came to me in a dream.

He was reclining majestically in a beam of summer sunlight, in the far border of the 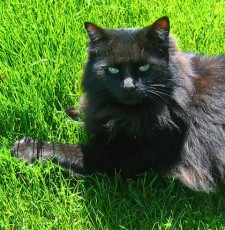 neighbors’ garden, and he was gazing at me with those all-knowing eyes, and he smiled as he used to do.  I felt his brave and powerful spirit, and an ineffable sense of peace, of rest.

I shared the dream with my likewise bereaved neighbors; turns out they had buried Tom in their garden in the exact spot he rested in my dream, lying bathed in that slanted shaft of sun.  He lives.

I am the thousand winds that blow. / I am the diamond glints on snow.

I am the sunlight on ripened grain. / I am the gentle autumn rain.

Of quiet birds in circled flight. / I am the soft stars that shine at night.

5 Responses to ODE TO A FAMILIAR