A VALENTINE FOR VIC

Posted on February 12, 2015 by Stephanie Silber

When it comes to the huge decision to share a life with another, first comes love.  It may sneak up on you and hit you like a wrecking ball; it could evolve over the fullness of time and shared values and experiences; or maybe it happens at first sight.

Following a recent spate of engagements within my family, I’ve been reflecting on the nature of Cupid’s arrow, and also upon the protocols and traditions that dictate making it official. 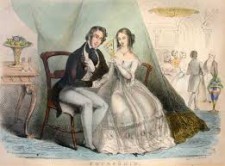 We’ve come a long, long way from Victorian tradition, when a gentleman must request permission for his beloved’s hand from her father, and if approved, then propose to her on bended knee.  And that’s just the beginning of an exhaustingly ginormous list of rules, from how to announce the betrothal, to how many parties must ensue and who will throw them, and in what, if any, circumstances may the happy couple enjoy each other’s company alone.

Times have changed.  Nowadays it seems that all the rules were made to be broken, though many prefer to take what they like from traditional mandates, and throw the rest away.  It makes for some pretty creative proposals.  We’ve all seen them on YouTube (since we all capture pretty much our every move on the iPhone in this post-modern era).  Cavorting, lip synching crowds of relatives, friends, co-workers leaping from behind the shrubs to serenade the bride-to-be before the proposal is made and the cork is 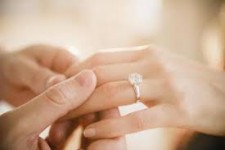 popped on the champagne.  A ring slipped on her finger as the sun goes down over the ocean.  A scavenger hunt through favorite places until that certain little box is proffered at a destination significant to the couple.  And then some.

In my own experience, it really was love at first sight.  We met in an acting class, Vic and I.  It was bleak February.  He had a deep tan, compliments of a recent sojourn to a sunny isle, and his eyes were as blue as a Caribbean sea.  Be still my heart.

The acting thing didn’t work out, but that was fine, because we did.  I suppose we figured we’d tie the knot eventually, but it wasn’t until we were three years in and living together for two of them that the die was cast.

It was the sultry summer of 1981.  I was running errands on the Upper West Side, where we were living.  And then I saw it, in a boutique window, a gauzy ivory confection by Jessica McClintock, all sorts of Edwardian, with bits of lace at the neck and elbows.  I slipped into the cool interior of the shop and tried the dress on.  It fit perfectly.  I held my hair up (allowing some tresses to dangle about my face and neck) and spun, staring into the  three-way mirror.  I was an ethereal stranger to myself.  I liked that.

When I returned home, dress box in hand, I repeated the process for Vic.  “Dude,” I said.  “This is a summer dress.  Time to set a date.”  He made no argument.  Perhaps he was stunned into silence at the blindsiding.

We were married three months later, at the Columbia University Faculty House.  It was 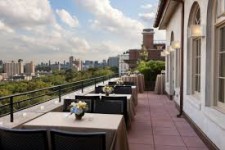 my dream wedding, a dream I didn’t even know I’d had.  A potent combination of setting, the perfect September morning, and sharing our joy with our closest family and friends made the occasion nothing short of magical.

Sometimes people ask, “But what if it didn’t work?”  What if he had said, as I twirled in our stifling living room in my new gossamer dress, ‘No way, Dude!  Bring it back!’  Moot point now, though I have to admit, it was a little ballsy. 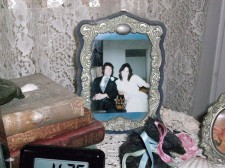 13 Responses to A VALENTINE FOR VIC