FROM THIS TINY VILLAGE, A NATIONAL MOVEMENT

More from the vault, in honor of the women who laid the groundwork, with gratitude and admiration.  Without them we wouldn’t have Women’s History Month to celebrate!  The following was a sidebar to accompany A WOMAN’S PLACE…in HISTORY.

From this tiny village, a national movement

It happened in 1848, in the kind of little upstate town that nothing ever happens in. 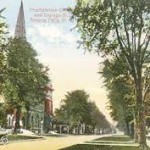 Nothing, that is, except a new westbound turnpike, a railroad, revivalist preachers crying salvation for all and a generous measure of abolitionist sentiment.  It happened in the Finger Lakes village of Seneca Falls, N.Y., when writer and feminist-to-the-core housewife Elizabeth Cady Stanton put the world on notice that women weren’t going to take it anymore.

“Hellraisers!” says Susan Lowell Butler, Executive Director at the National Women’s Hall of Fame.  She is referring to the fiercely humanist spirit that swept the region, which was to become known as the “burned-over district” for its climate of moral reform and passionate idealism. 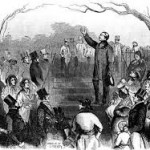 “The world exploded into individual rights in the 1840’s and 50’s,” Butler continues.  “There was suddenly in America a coming to the forefront of a pursuit of the real language of the Constitution.  And I think abolition more than anything else really stirred women.”

Certainly, that was true of Stanton, whose husband, a prominent abolitionist lecturer, traveled nine months out of the year.  Relocated to Seneca Falls from an active city life in Boston, the mother of seven found herself isolated, frustrated, and very much confined, she wrote, to “the women’s sphere.” 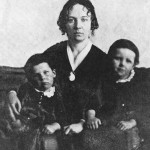 That sphere was not just domestically confining.  Says Butler, “Women weren’t allowed to own property, they couldn’t inherit things, all those laws that were in place at the time were pinching more than emotional nerves, they were pinching financial nerves.”  In short, she adds soberly, “It was very difficult for women to survive.”

Stanton, surmises Butler, was “at the end of her patience with nothing to lose.”  She convened a group of like-minded fellows to produce the “Declaration of Sentiments,” a document which called for equal rights for women in matters ranging from wardrobe to wages.  And, audaciously, it demanded the right to vote, an issue most of the convention participants eventually backed away from.

But the die was cast, and there’s been no turning back.  Now, the legends linger in this community steeped in history.  Residents are happy to recount tales like the one that has suffragist superstar Susan B. Anthony babysitting for Stanton’s children while Stanton wrote her speeches.

“People are proud,” says Linda Canzanelli, who is superintendent of the Women’s Rights National Historic Park here.  She cites as proof the Women’s Hall of Fame, an institution she works closely with, as well as the state-run Urban Cultural Park.  Then there’s the annual “Convention Days,” at which the 1848 gathering is re-enacted, and all and sundry are given parts to play. 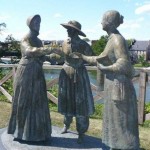 “You might get to be the minister who says, ‘God’s will is that women remain in the kitchen,'” Butler says, laughing.  “In a weird way it’s very moving.  What this whole thing is about is enduring values.  When you hear those words spoken today, and we read from the Declaration of Sentiments, they hold up.  They do endure.  They come and go and ebb and flow, but they do endure.”

2 Responses to FROM THIS TINY VILLAGE, A NATIONAL MOVEMENT