Writer/Director John Gray describes himself as “just a regular, burger eatin’ guy,” but his career arc spanning 32 years points to anything but, if you don’t count the day jobs.

Gray, now 58, does in fact count the jobs he had subsequent to being the youngest person ever awarded an AFI grant (aged18 and still in high school), before he wrote and directed his first feature film, BILLY GALVIN, back when GHOST WHISPERER was only an amorphous vision at the periphery of his sixth sense.  Brooklyn born and raised, Gray, the son of an ironworker and a working mother who raised her two boys on her own, applied what would be a career-long focus and discipline from an early age, along with his trademark boyish charm; the combo catapulted him into the big time as if out of a cannon.

Of course, it didn’t feel quite so easy as he lived it. But to hear him tell it, the kid John Gray was having a blast, and the joy he continues to find in his work has never deserted him.

Now, he’s musing about exactly when and how he realized he was destined to create the 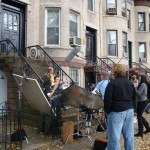 stories that flooded his head and his heart from a tender age, as he traipsed the streets and the garbage rooms and the brownstone stoops with his dreams and his trusty 8 mm camera.

“I made my first movie when I was 12,” he remembers.  “And tons more 8 mm and Super 8 and 16 mm shorts during the ‘70s and all through my high school years – so one could say it began there, which sounds ridiculous.”

And he was only just getting started. 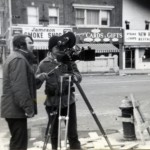 alcoholism when I was 22.  Or we could take it from when I was first hired as a writer in Hollywood in 1984, after which I no longer had to have a non-writing or directing job…any way you slice it it’s been a long damn time!”

But for starters, John Gray had to pay some dues.  He worked as a messenger at a New York City film production house right out of high school, and went on to cut negative, deal with tracks and titles, and was then given additional responsibilities such as editing trailers and documentaries.

“I did not excel,” he confesses.  “I was a set PA, an assistant cameraman, and general gofer, all of which I failed at miserably.  I was interested in one thing: what happened in front of the camera, and I could not keep my mind on much else.”

Later Gray toiled as a bartender, sold cookbooks for Time-Life over the phone, peddled candy door-to-door in Coney Island, where, he recalls, “I almost got my ass kicked!”  And he’ll not soon forget the audience recruiter gig for CBS, where he was that guy getting the masses in to test shows by “literally standing on a street corner, shouting ‘Free tickets, television preview!’  This one was one of my better starvation jobs!” 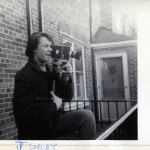 By 1977, Gray had made a 40 minute short “on credit cards,” called THE PATRIOT GAME, a story about brothers in which one peace-loving brother is pressured to take his sibling’s place in the IRA after his brother is killed.

He was trying to figure out his next move, and how he could get people who were in a position to help him see the movie.

“I made a list of directors I admired who I knew lived in New York, and I went through the Manhattan phone book until I found one who was actually listed with an address and phone number.”

That director was John Avildsen, fresh off winning the Oscar for ROCKY.  Gray wrote “a very sincere letter to him, a fan letter really, but also asking if he would look at my movie, and if he could sit with me for a half hour and give me advice.”

To Gray’s great surprise, he received a positive response.  It took months, but eventually he got THE PATRIOT GAME to Avildsen, and not merely because he had taken to hanging around outside Mr. Avildsen’s home with a bunch of balloons imprinted in large letters with “LET JOHN GRAY DIRECT!” 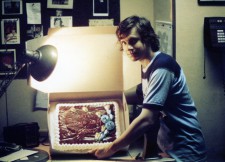 “My heart still skips a beat just remembering how I felt when I got that call!  I met with 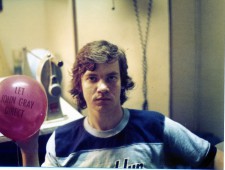 him and he could not have been nicer to me.  He loved my film, loved that I had made it for 5K, and I told him I had trouble getting taken seriously because I was so young — and looked it!  The whole thing was so heady.  I remember seeing his Oscar, and just thinking to myself, ‘This is how a big time working film director lives!'”

Avildsen put Gray in touch with a nephew, who was an aspiring producer.  The two met several times, and though nothing in particular came of it, the young aspirant took away something of great value from the experience.

“I was always grateful to John Avildsen,” Gray says.  “For sitting with a total stranger, at a time in his career when he was red hot, and offering me advice and encouragement.  He’s the reason I still try to pay it forward when I can.” 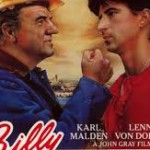 In 1984, the proverbial big break arrived, compliments of what would be Gray’s first feature, BILLY GALVIN. a coming of age story in which a steelworker (Karl Malden) and his son (Lenny Von Dohlen) lock horns over the son’s wish to follow in his father’s footsteps; the father wanted a better life for the boy.

“The script for BILLY GALVIN got me an agent at CAA,” Gray reports.  “That was when I was working as a street recruiter, and was using the payphone on my corner as my office!”

While BILLY GALVIN wouldn’t be made for another couple of years, having that agent made it possible for Gray to go out to LA and start earning a living writing scripts for hire — none of which got made.

Ultimately, Gray explains, “We got financing in a triple deal with PBS’ American Playhouse, a Texas consortium, and a company called Indian Neck owned by hockey team owner Howard Baldwin.  All in all it took the producers, Tony Mark and Sue Jett and I, over seven years to get the film from script to screen.”

If BILLY GALVIN marked a high point in Gray’s early career, his 2010 feature, WHITE IRISH DRINKERS, won Gray critical acclaim and broader visibility.  The film explores a similar trope — a difficult relationship between a father and a son — and like its predecessor, draws loosely from the director’s experiences growing up in working class Brooklyn during the seventies.  The movie was shot on location in 17 days on a budget of 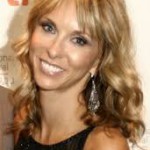 $650,000 and starred Nick Thurston, Karen Allen, Peter Riegert and Stephen Lang.  Gray’s lengthy body of work, along with a more mature perspective on the material,  gave the project a depth and passion that struck a deep chord in audiences.  And the production was a family affair; wife Melissa Jo Peltier was a producer and the second unit director, while daughter Caitlin had a small role.

Gray recently came off ABC’s THE FAMILY, for which he was a producing/director.  Currently he is writing a pilot for NBC. 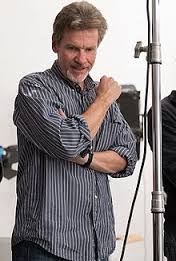 “I was very lucky to come of age at the height of the high profile, kind of ‘event’ made-for-TV movie,” Gray explains.  “I had carved out a great niche for myself as a writer/director.  The networks liked what I did and they left me alone.  I got to tackle fantastic subjects like the relationship between Dean Martin and Jerry Lewis, the first submarine used in combat, the Lincoln assassination, the Manson murders.  It was a 13 or 14 year run where I made movie after movie, with great budgets, a lot of freedom, and travel all over the world!”

John Gray, not a kid anymore, will always be a Bay Ridge boy at heart.  And he is that rarity among humans, a fulfilled man.

“When the work is going well, it’s just like being in heaven,” he says simply.