“CAN WE GO HIGHER” (A GREAT LAST SONG PRIOR TO ENCORE)

Posted on December 5, 2012 by Stephanie Silber

So how full was the hall?

The hall was maybe a little less than half-full, but it was still a good crowd. It was hard to judge, since I was shooting from above and it sure looked like a lot of people streaming in. Probably a thousand.

What was the performance like? How was it received by the audience? 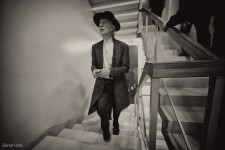 The performance was as elegant as the setting. The band was really tight, they sounded great. I think the audience was spellbound. They were feeling it. Nenad was interacting with the crowd, and unfortunately I couldn’t understand much, but I got the sense from the warm response that it was more meaningful than most rock banter. The song VUKOVAR, which is about a city devastated during the war — it was harder hit than any city since WWII — brought people to tears. With this song Nenad was joined by a Klapa group, which traditionally sings a capella. The audience had never heard the ancient folk music as it was sung infused with Nenad’s rock sound. They were mesmerized.

At another point Nenad took the stage with bass player Richard Lindsey, who was then playing ukulele. They did a song that made everybody smile; Nenad told the audience that Richard says you can’t be sad when you hear the ukulele. 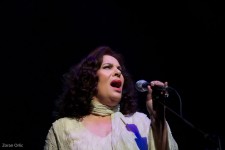 One of the guest stars in the show was a woman named Radojka. She’s been a star in Croatia for quite a while. Now, I’ve known Nenad for many years and I’ve heard him sing CAN WE GO HIGHER many times. But this rendition, comprised of Nenad, the band, Klapa Sinj, and Radojka knocked the song into the stratosphere. A great last song prior to encore.

The concert was taped for Croatian television?

I am not exaggerating when I tell you that it was a superior production. During the concert I became aware of the feed, and the production value was outstanding, world class.

Nenad was performing some of the songs from his new album, EVERYTHING IS FOREVER. Can you tell us about the album?

Some of the album was recorded with an orchestra in Croatia, so I think it’s safe to say that the result is amazing — it definitely blew the band away.

How would you describe Nenad’s music? Any comparisons among his peers? 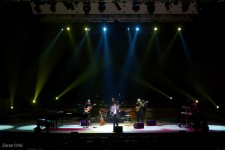 Nenad stands alone. It’s his heart, his political sensibilities, his sense of melody, his turn of phrase with a lyric. There is no one like him. People came to this concert from Italy, from London, from China, from all over the world, and it was well worth the journey. You could tell by the comments overheard.

You were having some doubts and anxiety as the time approached to fly to Zagreb. Can you talk about that? 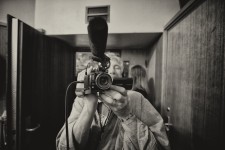 I anticipated going there feeling that this thirteen year journey Nenad and I have taken together would result in a climactic conclusion to the film. But I felt terrible about the fact that I wasn’t going there shooting in hi-def. I started the project in the late 90’s, shooting mini-DV guerrilla style with a little Sony camera that suited me fine, I understood not only how to use it, but how to use it well. I’m no cinematographer, but I shot stuff for our Bravo Profiles on Cyndi Lauper and Robert Duvall, and I thought it came out very respectably; it was used in the shows, so it worked out OK. So now I’m shooting with this Canon camera that I really don’t know that well. Plus, you can’t get away with mini-DV anymore, everything’s HD, and I am sure not going to switch formats in the last quarter of this film. And considering that my distribution possibilities have been limited in the past, the last thing I need is an additional handicap.

And the sound? What are you going to use for track on the doc?

In the past I used a radio mic; I don’t have that anymore. For this trip I used a camera-mounted mic that never seemed to behave itself for me. This might be the first music documentary ever that’s totally silent — there’s a new innovation! Seriously, I’m gonna have to be really creative about problem-solving this or fail miserably.

How did you feel upon your arrival back in the US, re-entry to everyday life?

Sick. I have a really bad cold, I’ve had a headache for the last four days. The Rakija is still in my system and shows no signs of leaving. I looked at some of the footage, and yeah, I definitely do have some sound problems. But luckily, my greatest strength is editing, and it is going to take every bit of my skill to even remotely save my ass with this film. But I’m gonna do it for Nenad.