EMOTIONS RECOLLECTED IN TRANQUILITY (AND JETLAG)

Posted on December 3, 2012 by Stephanie Silber

Vic is back. He arrived at Home Team’s Corporate Headquarters last night, in the grip of a vicious, dripping cold, and his approach can be heard from floors away as he coughs and hacks helplessly. He was right back in the edit room bright and early to work on the feature he’s cutting, but really is but a shadow of himself today.

So, naturally, I asked him to give me an interview! I did cut him some slack — we did half today and will finish tomorrow. Below, the story so far.

You’ve been saying that this Croatia trip will provide a closing to the documentary. How and why? 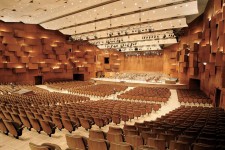 From the time Nenad mentioned that he was planning to take the band to Croatia to play a 2,000 seat concert hall in Zagreb, I felt that our journey together was about to come full circle. When I first started shooting with Nenad in the late nineties, I went with him to his homeland. At present, he’s probably spent half his life in the United States. Now, having internalized the American rock sound, he was going home, bringing with him the unique brand of music he’s evolved over the years. Nenad is no stranger to large venues, he’s played with luminaries such as Pavarotti, and to big crowds such as Woodstock ’94, but this time the weight would be on his shoulders as the main attraction in a huge space. Unless you’re the Stones or U2, in this economy it’s not easy to put the butts in the seats. This was going to be a huge challenge, a do or die. There would be a lot of feelings, a lot of emotion, and I had a powerful sense that capturing it on camera would give the film a natural — not to mention dramatic — place of closure.

Nerves must have been pretty strained. Did everybody stay calm under pressure?

The band was really supportive. The two years they’ve been playing together really showed. During sound check the staffers didn’t do things the way the band was used to and there was a real possibility that things could go very wrong. Meanwhile, Nenad was extremely drained from ten previous days of promoting the concert with radio and TV appearances. It was a full court press to sell tickets. A lot of people in Croatia know Nenad’s work, but since he hasn’t performed there in a while, he had to work hard on publicizing the event.

It was a grueling schedule — how did that go?

There simply was no down time. The trip itself was maybe 12, 14 hours with layovers. The band was jet-lagged but they’re total pros. We went straight from the airport to rehearsal. We arrived on Thursday and were back on a plane by Sunday.

Did anything go wrong?

Well, I almost got beat up.

After the concert a couple of guys from the band and I went out with a local TV producer who attracted attention from the drunken patrons at the first bar we attended. While she was introducing us to the native drink, Rakija, and I was getting more drunk than I meant to or even realized, I somehow provoked the very big and very thuggish [name withheld to protect the innocent]. He’d left the bar, but I must have endeared myself to him somehow as he was compelled to come back with only one thing on his mind and it wasn’t love. It dawned on me then that death was imminent and a certain calm engulfed me as I resigned myself to the fact that some pretty hefty dental work investments were about to be left on a cement saloon floor in Zagreb. Fortunately, our hostess Renata convinced this hulk that I was in fact too pathetic to beat up. He then rubbed my head in a friendly fashion and we became friends on our way to another bar. Luckily, that one was closed.

It was tough. The sound check went for a couple of hours, the promoter, albeit a wonderful and generous guy, was checking his watch constantly, things weren’t going as anybody had thought. The promoter wanted the band to rehearse but without the monitors properly balanced for the band to hear themselves it made no sense to play. In addition, Al Orlo, the guitarist, told me that the sound would be affected by the number of people in the theater — full is much better. We already knew that the advance sales were not what we all would have liked. But the big mystery was that Croatians tend to buy tickets at the door last minute, which made for a big variable nobody would know the outcome of until showtime.