Posted on September 16, 2013 by Stephanie Silber

Acceptance and rejection are the two sides of the story for any filmmaker, and in fact for anyone who takes chances and puts themselves out there, whether artistically or otherwise.

It’s been a little over a week that our EVERTHING IS FOREVER campaign launched, and it has already been an emotional roller coaster on a daily basis.

As I write this at 5:30 AM, I can attest to one crowdfunding side effect: You don’t sleep.  It used to be that I would rise to feed our four cats at 5 AM and fall blissfully back to sleep for another two hours, but these days I just toss and turn as my mind races, obviously eager to see if any donations came in during the night, but primarily trying to come up with new and creative ways to appeal to potential contributors.

Giving up on sleep entirely, and eager to put my new theories to the test, I take the stairs to my edit room at a dead run, plotting out little videos, photos, and enticing copy like some kind of carnival barker, anything to get ’em in the tent motivated to donate. 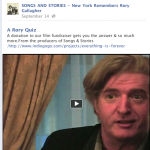 We’ve got outtakes from our previous films for people’s amusement; quizzes for Rory Gallagher fans to puzzle over or get it right, driven by a desire for their own download of SONGS & STORIES along with an exclusive and revealing interview with Rory’s brother Donal.

An Ozzie Virgil baseball card was recently posted, along with some copy on his 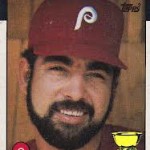 Facebook timeline in the hopes of luring his friends into the tent with a promised look at what his life was like in baseball’s minor leagues, via a download of CHASING A DREAM.

This morning’s pre-dawn hours were spent planning my “virtual birthday party and fund-raising event.”  My night terrors involve the dread of turning on the computer at sun-up to find that nary a soul has showed up to Indiegogo, with the attendant sinking feeling that 24 hours have passed and we’ve raised not a dime.

Now, these crowdfunding campaigns are time sensitive — time is money, or more accurately in the case of EVERYTHING IS FOREVER today, time ISN’T money.

My first instinct is to give way to utter depression and real fear that we will not make our goal.  The reality is that it will be much harder to finish the film without contributions, and we now have a commitment to all the people who have generously donated so far.

But what I’m learning is that rather than giving way to discouragement, I can instead turn that energy to creating solutions; it’s not just going hat-in-hand and hitting up friends and family and strangers alike for money.  It’s more like ensuring a collaboration with people out there who “get it.”  Who want to be a partner in a project which has value not measurable in dollars and cents.

We certainly don’t expect excited crowds to stampede in like a Toys R Us sale on Christmas Eve, but if idle hands make the devil’s work, my idea crunching in the small hours drives the demons away.  It allows me to keep doing what we’ve been doing all along to make the film — you roll up your sleeves and get to work.  And maybe, just maybe, in the process enjoy the ride.