Posted on September 11, 2013 by Stephanie Silber

The last shot of THE COLOR OF MONEY finds Fast Eddie Felson leaning over a pool table as the camera dollies in to a beautiful closeup and he proclaims with authority, “I’m back!”  That about sums up my own journey at this point as well.

For many a filmmaker in 2013, crowd funding has become de rigueur.  It’s the more desirable difference between going the distance on an indie film and maxing out the filmmaker’s credit cards, or having friends, family, and hopefully a targeted audience to participate in getting you to the finish line.

It occurred to this filmmaker that he is right back where he started some 30 odd years ago.  In the summer of 1980, I was bitten hard by the filmmaking bug, and decided to combine my two passions: baseball and film.  The end result was CHASING A DREAM, the story of minor league baseball players in Reading, Pa,  trying to make it to the bigs.  How I managed to get that film made was through crowd funding, although that term wouldn’t come into existence until decades later.

The budget on CHASING A DREAM was approximately $21,000.  It would be financed by selling points in the film.  $450 a point bought you 1% of the profits.  I held screenings, made phone calls, and put out the word to attract investors.  I traded points for skills, as well.  The cameraman got x amount of points, ditto the sound engineer, composer, and other crew members.  Hey, I thought it was a great deal as I was determined to make a film AND a profit.

Well, I did make a film, but I didn’t make a profit.  The business is fickle; CHASING A DREAM ran on the USA Network and other cable outlets, but they only paid a couple of hundred bucks per airing.  If I had a penny for all the people who saw the film, all involved would probably have made a profit.  An unfortunate trend in my life would be started at this point.  I went broke. 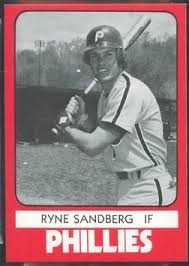 An interesting aside: I had thought to buy a team set of cards for all of my investors as a little show of appreciation.  However, being so involved in shooting the film, I never followed through on that sweet thought.  I bought one team set and cut it up to create a decidedly homemade VHS cover for the film.  Fade in a few years later…I’m at a card show and there is the team set of the 1980 Reading Phillies, the same set I could have bought for a dollar, now priced at $900.  You do the math.  Ironically, had I followed through on my little perk, each investor could have doubled their money with the cards of Ozzie Virgil, Ryne Sandberg, and Mark Davis, et al.  (Virgil, Sandberg, and Davis, incidentally, made it up the the Philadelphia Phillies that year, just in time for the World Series.) 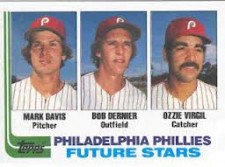 Throughout the next few decades more indie films were to come, each with its own inherent financial disaster.  One such, RANDOM LUNACY, about a family who lived homeless by choice, nearly left me homeless as I re-financed my house to finish the film.  Though the payback was a slew of wonderful and unforgettable festival screenings, I had no money to pay back the bank.  But I survived, and I learned a lot.

Today, as I’m finishing a project begun in 1999, I’m back in the unenviable position of scrambling for money, this time via crowdfunding.  A full summer has been spent writing and re-writing the pitch, constructing trailers and other supporting videos, e-mailing and Facebooking fast and furiously, causing sleepless nights and headaches, all in the service of bringing one last film into existence.

I don’t know how this one will shake out, but I do know the film will get finished because the most valuable thing that I’ve recognized after all this time is that there is one fuel and one fuel only that drives a filmmaker.  It’s called passion.  It can’t be bought.  Learn more here.