THE DARK SIDE OF TIME: An Excerpt Two

Sunny is having a very bad day, and it’s barely begun.  Sleep deprived from those dreams (nightmares) she can never quite remember.  The baby’s first birthday party to plan.  A recently purchased fixer-upper cottage (that seems to have been waiting just for the Quinn family…and not in a welcoming way).  Then there’s Shepherd, caretaker at the church complex next door and Sunny’s part-time handyman, ever more annoyingly ambiguous (and deeply strange).  A low and bilious sky, a ceaseless pouring rain.

Shepherd said, “You having a birthday party you need a dining room table.”  He was putting the finishing touches to the trim.  The cottage had begun to 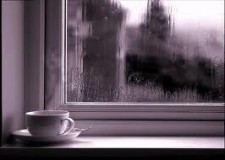 surrender its shabby, uncared for ambience to expanses of gleaming floors and linen white moldings and a color palette of sky and earthy greens and roses.  Even in the murky day, Sunny could feel the transformation, and it heartened her.

Of course, Shepherd was right about The Ballroom.  Emptied of the clutter of the move, it seemed a vast and barren space.

“We’re probably going to get something from Ikea,” Sunny told him.  “Soon.  It’s been under discussion.”

“IKEA!”  Shepherd was disgusted.  “That shit has no style.  I got something for you.  I think you’ll like it.”

“We’re trying to keep to a budget,” Sunny said.

“Nah, this is free for nothin’,” Shepherd waved her off.  “I saw it down the school basement, doing some organizing for Father.  He said you could have it.  Says he can’t use it why shouldn’t you?”

By the time they’d made a dash from the cottage to the rear of the convent, 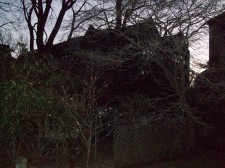 Sunny was soaked, her voluminous poncho no match for the torrents of rain.  Her hair hung plastered to her cheeks.

“We’ll just go through the old utility tunnels,” Shepherd said, motioning her down a short flight of stairs.  “Why drowned in this mess?”

The stairs descended to a wide, dim hallway running the length of the convent on the Quinn’s side.  “That’s my place,” Shepherd said, gesturing.  A door there slightly ajar.  Sunny heard movement inside, a muffled thud.  An animal’s soft whine-?  Maybe it was a television left on.  Shepherd seemed not to hear.

“This is the housekeeping wing.  In the old days?  The kitchen was down here.  My place was for the housekeepers over the years.  Nice.  Two rooms PLUS a kitchenette.  It ain’t a palace but it works for me.  My needs are few.”

He dug into one of the pockets of his carpenter shorts which clung dripping to his muscled thighs, withdrew a huge bundle of keys on an old-fashioned key ring.  He glanced at Sunny, smiling.  His eyes very bright.  “You wit’ me?”  A door across from his apartment.  Another flight of stairs leading downward, steeper now.  Sunny was freezing.

The stairs gave onto a wide, low-ceilinged tunnel lined with pipes, lit by fluorescents.  Greenish-yellow walls were peeling.  The floor was cement.  Their steps rang hollowly.  The tunnel seemed to disappear at the far end, a vanishing point.  The air was close and musty.

Ahead of her, Shepherd appeared even more enormous than ever.  Ducking his head at intervals to avoid pipes.  “You wit’ me?” he asked again.  Turning, his flushed unshaven countenance rearranged itself before her astonished eyes, resolving into a wolf’s.  Yellow eyes glowing, wild, primitive.  Its tongue lolled.  The lupine face grinned insanely at her. 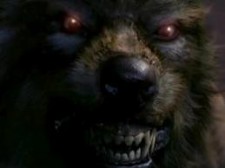 Sunny blinked, and it was Shepherd again.  One of the fluorescents flickered overhead, with a sharp thrum of electricity.  Shepherd laughed.  For a third time he asked, “You wit’ me?”  He was pulling out another key, another door, solid, ponderous, flung wide now.  He flicked a switch within.  That same concussive whump of electricity.

School desks with built-in benches cluttered the cavernous space.  The far walls lost in gloom.  Old school, Sunny thought dazedly.  Did I go to school here when I was little?  She felt a brain zap coming on.  It passed violently and quickly.  She wanted to spit out the sudden taste of iron in her mouth.  She thought she may have bitten her tongue hard enough to draw blood.  And then she saw the table.

A single pedestal, lion-clawed and massive, lustrous with age and rich with

subtle detail.  Pale yellow wood delicately grained.  Shepherd grinned at her.  “Knew you’d like it,” he said.  Probably only seats eight, tops, but it makes a good start, right?”

“Right,” Sunny agreed.  But all she wanted to do in this moment was get out of the yawning space, with its whiff of her old school and the giant’s perspiration, the shrouded shadows.  “Where did it come from, do you think?  The rectory?  The convent?”

“Beats the living shit out of me,” Shepherd said in a conversational tone.  “It’s yours now.  Looks like it was made for your dining room, like, special.  Don’t you think?  Was I right or was I right?”

Sunny said suddenly, “Do you think you can close off the crawl space in my basement?”

“That’d be a negative,” Shepherd answered.  Still smiling.  “But I will get the table over by this afternoon, you around?”  He flicked his do-rag from his head and wiped his face with it.  “You need access to your gas lines, plumbing and shit,” he told her.  “Might could stack up some shit by the opening, it spooks you that much.”

“How did you know it spooks me?” Sunny asked.  Little hairs rising on her neck and arms.  Shepherd looking right at her, right into her thoughts.  In the dim space his eyes really did look yellow.  Feral.

DISCLAIMER:  Stephanie Silber owns the copyright to the foregoing and gives permission only for the writing sample herein to be distributed free of charge, and without alteration.