Vic’s gone off to Tampa for Spring Training, along with his waggish cronies, where they are certain to be making extravagant wagers, boasting mightily about their respective teams, and watching a WHOLE lotta baseball.  Sun, silliness, and a rollicking good time.  In their honor I give you OPENING DAY, an oldie written at a time when Yankee Stadium was still the House That Ruth Built, and the bleachers a bacchanalian carnival beyond the wildest imagination.

We waited until the last possible minute to bother about tickets; a mistake, as it turned out, since it was after all Opening Day, and Billy was back, and the great DiMaggio was to throw out the first ball.  But it has always been our way to wait until the last minute, and we were therefore not surprised to find our choice of seats limited to either a precarious perch in the far reaches of the upper stands, or in the bleachers.  Since we are both afraid of heights, the bleachers would have to do.  We seated ourselves comfortably in the last row, our backs against the concrete wall, and prepared to watch the show.  And the ballgame, too, of course.

Already, all was bedlam in the bleachers.  Just in front of us, a hardy youth of about 18, sporting a hat emblazoned ‘Copenhagen,’ was spotted purchasing a joint from a wizened creature of indeterminate age and gender, though a wisp of mustache seemed to suggest a male; that worthy had been doing a brisk business throughout the bleachers, calling “Yankee joints!  Getcha Yankee joints!  Yankee bags here!”  He was displaying a plastic bag filled with an astonishing number of skinny hand-rolled.  Every now and again he would stop and accept a sip from a contraband bottle somebody in the crowd would offer.  Standing on a bench as the first inning approached, he did a merry little dance to the organ riff.

An ice-cream vendor warned him of the presence of the law, and he headed for the exit, his high good spirits unchecked.

“I paid a buck and a half to get in,” he informed the fans.  “And I’m leavin’ out with a couple hundret.” 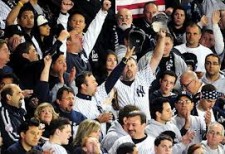 A pigeon dropped its leavings on the ground between Copenhagen’s legs, who appeared not to notice.  He was taking off his shirt, oblivious to the 35-degree wind.  Opening Day had come around again, and that meant spring, and sitting in the bleachers with your shirt off drinking beer.  There was no sun this Opening Day, and the goosebumps bristled on Copenhagen’s naked back.  He grew too cold within five minutes to care about losing face, and the shirt and windbreaker went back on, to a torrent of hoots and catcalls from the crowd.

The rotund and jolly fan beside me called, “Yo, bro, leave it off!  You’ll get on TV!”  The man sprayed me with a beery mist as he shouted.

Nearby, a bleary-eyed fellow allowed his Four Roses bottle to fall empty underfoot and proceeded to urinate against the wall.  The fan beside me was appalled.

The bleary-eyed guy appeared untouched by this advice.  He asked for a nip of the vodka the shouter-sprayer was chasing his beer with.  Very hard drinking was in evidence this Opening Day, and the first inning had yet to begin.

A skinny dude in his forties with a dissipated face sitting to our other side reached down and tapped Copenhagen on the shoulder.  “My name’s Jay-Jay,” he told him.  “And two bucks says the Yankees don’t score in the first.”

“Done!” Copenhagen whipped out his deuce, and my companion was chosen as the neutral who would hold the four dollars.  This was the last sentence Copenhagen would utter until the sixth inning, and the last wager Jay-Jay would make throughout the game.

Jay-Jay had the look of a man with a gambling problem, among other challenges.  The shouter/sprayer became interested.  He introduced himself all around as George the Fifth.  “My son is George the Seventh,” he informed us.  “I work on the West Side Highway.  You know Pelham Construction?  I told my boss at noon I was goin’ to the store, pick up a sangwich.  Then I come up here.”  He cackled wildly at his own guile. 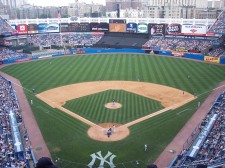 But his attention was diverted by pre-game festivities; hang-gliders were drifting gracefully one by one into the stadium.

Jay-Jay called to Copenhagen, “Hey guy!  No score in the first, right?”  Copenhagen made no answer.  He was sprawled face down across the bench, clearly under the weather.  He began to lose his beer and pretzels at precisely the moment the Yankees began to lose the ballgame, at the top of the first inning.

Jay-Jay won his bet.  Flushed with success, he attempted to find more takers, but was roundly ignored.  It became unfortunately clear that he was a Tigers fan, and this affiliation annoyed George the Fifth.

George the Fifth reached then to pluck the Yankee cap from Jay-Jay’s head and placed it upon mine, where it remained only briefly. 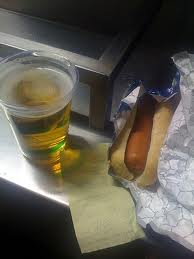 “Whaddaya wanna wear that for? You ain’t no real fan,” he instructed Jay-Jay sternly.  He threw a bit of Yankee frank into the crowd for emphasis.  “You should take off that hat and stomp it,” he added.  He laughed wildly, head thrown back.  By way of truce, he offered Jay-Jay his vodka bottle.  Jay-Jay demurred prudently.

Jay-Jay, equally insulted, declined to answer.  George the Fifth appealed to the fans around him.  “He looks like a fuckin’ truck driver, don’t he?  Hey, Otis!”  This to a black kid whose cap was logo-ed ‘Osiris.’  “Don’t he look like a truck driver?  Who’s Iris?  That your girlfriend?”

Osiris regarded him coolly.  “That’s my name, yo,” he said, removing his cap and holding it up, presumably so George the Fifth would be able to read it properly.

Copenhagen had begun to shake violently, and his shame-faced cohorts were covering him with an assortment of towels, denim jackets, and Yankee jerseys.  Jay-Jay, despairing of any other gamesmen as hope for a Yankee win swiftly waned, attempted unsuccessfully to rouse the trembling wreck that Copenhagen had become, proffering a couple of wrinkled bills.  George the Fifth called, “Hey livin’ dead!  Get up!  Take your shirt off!”  Wild laughter, spray of beer.

The cold wind blew, the Tigers continued to bare their teeth and claws, and the Yankees frankly stank up the field.  But in the bleachers, all was as it ought to be.  It was Opening Day.