SUGAR ON THE LAM

Posted on December 16, 2017 by Stephanie Silber

We saw them first in the back of the garden, busy playing with their mother’s tail, herself little more than a baby. We called her Feral Anne, which suited her, or so it seemed to us. She met both criteria on the name; she was living on her own, somewhere amidst the grounds of the church / school / convent buildings next door. Feral she was born, and “Anne” seemed true to her regal bearing. She was quite strict with her kittens; later we realized it was a protective strategy. She was not shy about disciplining the babies, though really, all they did was play, pouncing upon each other and rolling in the grass, just now turning the emerald green of early spring. She wanted them to know she was boss, though their father, the watchful, golden-eyed Tom, allowed them to think otherwise. 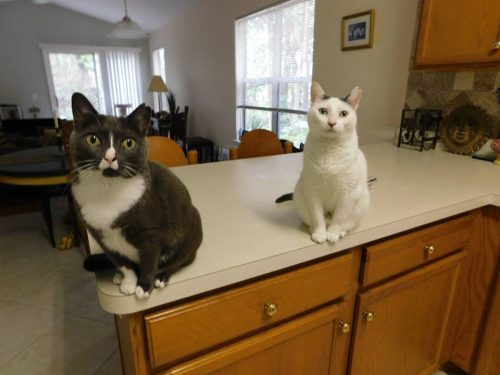 Then he was gone. We thought perhaps a neighbor on the street behind us took him in and kept him in, though it was difficult to think of him imprisoned thus. Safer in the long run, we supposed, (and fervently hoped) but we would never learn his fate.
In the meantime, the little guys grew bigger every day, as they lost their shyness. They showed up without fail every morning and early evening, wriggling under the chain link fence that bordered the church grounds. They moved in single file, their tails raised high; I’d read somewhere that was a sign of utter confidence; certainly they were sure of a couple of square meals per day. Eat, sleep, and play was their way of life, and I am here to tell you that there is no better mood-booster than a duo of kittens at joyful play.

Their names came from the cosmos, or some such ineffable place. The sleek white with
gray markings was Sugar. The deep gray with white markings, notable for her extreme reticence, was called Shy Ronnie. We adopted them soon enough, of course. Sugar, always prone to mischief, quickly earned the moniker of Baby Face Nelson.

Then our circumstances shifted. We planned to make the major life change we’d always known was simply a matter of time: a long distance move that brought us to St. Augustine, Florida. We hired a pet transport service to bring the cats safely home to our adopted town. I will never forget their curious little faces and my vast relief and joy at seeing them — they seemed not to have a care in the world. That’s just the kind of kids they are.

As I set up house in St. A,Vic had already been out of town for work several times. It was my wont to sit on the little front screened porch in the calm silence of our street, just dreaming, or thinking, or reading. On one such occasion I was joined by Sugar, and I watched in disbelief as the cat managed to flatten her body and slither like some sort of mutant, furry, snake beneath the accessible opening I had not known was at the bottom of the screened door.

It was already full dark, but I grabbed a flashlight, a box a dry food to shake (by way of enticement), tucked my pants legs into a pair of heavy socks, and set out for parts unknown, beginning with the “jungle” behind the house. (Floridians call this sort of brush a hammock.)

Then, naught but a gaping hole in the universe where Sugar once was. However, after over seven horrible days and sleepless nights, we’d had several sightings, as well as help and support from our friend and neighbor Lucinda, who created “lost cat” posters that included a photo, and she helped me staple those to telephone poles. Vic and I roamed the streets, shaking the box of food like maracas. There were possible sightings; either Sugar had a feral twin, or it was our own sweet cat roaming the streets, lost and probably very confused; still, Vic believes that our few sightings helped calm the cat’s bewilderment and eventually led her home, sensing our proximity.

And then, at last, one fine morning, before dawn, checking the screened porch for the umpteenth time, there she was, our Sugar, dirty from head to foot but looking none the worse for wear; in fact, she looked VERY proud of herself.

We were proud of her too, and I am not ashamed to confess that Vic and I both shed tears of happiness. We don’t believe Sugar will ever disappear again, certainly not on our watch, and not without a fight. Shy Ronnie is right there with us on the Sugar Protection Squad. She prefers looking at her world from the safety of a window ledge, on the right side of the glass, inside the house.  She’s quite content to have to have Sugar nearby, laughing at all of her jokes, and helping to catch toy birds. And, it should be stated clearly, much of their spare time is spent cuddling with their Daddy.

6 Responses to SUGAR ON THE LAM