Posted on September 22, 2017 by Stephanie Silber

Vic was chatting on the phone as I tried not to get agitated, my eyes glued to the TV. The forecasts blared scary warnings, while Hurricane Irma barreled toward the USVI as a potentially catastrophic Category 5 storm. My heart sank as Florida Governor Rick Scott uttered the dreaded words: “Mandatory Evacuation.” He noted ominously that “this thing is bigger than our entire state.”

While forecasts showed the center of the storm nearing Florida’s eastern coast, the so-called “cone of uncertainty” — areas where it could strike — covered all of the Sunshine State.

“So take this seriously. Leave now. don’t wait,” he warned during a morning briefing.  “It’s wider than our entire state and could cause major and life-threatening impacts on both coasts.”

I scribbled on a scrap of paper, feeling wild-eyed, and held it up for Victor to see: “MANDATORY EVAC” — no punctuation necessary, though exclamation points and question marks were squirreling through my brain.

We took it very seriously indeed.

Hurriedly we packed up a few changes of clothes, lots of water, and our three cats in their carriers (one of whom was 17 years old and as it happened, not much longer for this world), locked up our pretty little house and hit the road.  We’d barely been in Florida a full year.  I admit that I was stone terrified.

We decided to head for Alabama, get the hell out of the way and hunker down.  Why Alabama?  Because there were no hotel rooms whatsoever left to seek refuge in until we reached the tiny town of Elba, and there we made our way to the last room left in a shabby, though scrupulously clean lodgings, which nevertheless all but screamed BATES MOTEL.

The cats went immediately under the bed, and were spotted only sporadically for the next several days.  I remember very few details of the experience, save for the cavernous space 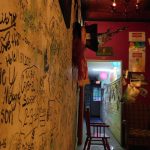 across the road called The Rabbit Hole, which turned out to be a pretty cool bar/dining spot.  So cool, in fact, that its mother/daughter proprietors actually travel to the Sundance Film Festival every year; Vic and I are filmmakers and have never ONCE been to the fabled fest.

And there in Elba we lingered, watching news and weather and making small exploratory expeditions: We stood on the banks of the broad, muddy, and meandering Pea River, watching kids play in dazzling sunlight at a birthday party in full swing beside the winding stream. Spanish moss festooned the branches above our heads, moving softly in the hot breeze.

We had a quite decent breakfast seated on a bench outside the lone supermarket.  We came upon a little barber shop, its only customer chair located under an awning in the great outdoors.

We did our laundry at the local Laundromat, in the process making the acquaintance of one J.D. Davis and his teenage son. 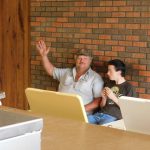 Without so much as saying hello, J.D. handed us the roll of quarters he was holding and refused to take no for an answer.  My eyes welled up; surely this was indeed the kindness of strangers, in all its humble glory.

Another highlight — we overheard one lady say to another, “See you on Tuesday if the river don’t rise.”  The response, commonly heard in these parts, “Yes, ma’am.”

It was pure Southern Gothic, and I mean that in the best way.  We’ve traveled extensively in the American south, but this was total immersion.  This was Flannery O’ Connor country.  Harper Lee.  Truman Capote.  “Other Voices, Other Rooms” indeed.

There is a happy ending to this story.  After the long, long drive back to Florida, we found downed branches aplenty, with one huge limb a quarter inch away from our sliding glass door, but La Selva Mariposa, which I’ve named our cottage (it means “The Jungle Butterfly” in honor of the many beautiful winged critters that flit in and out of our own private jungle) remained completely intact and dry as a bone.  Can you shout hallelujah? AMEN to that. 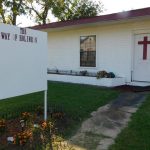 7 Responses to SPINNING AWAY