It’s feeling a bit like old times here at Home Team.  It’s taken forever, but we’ve got a film nearly ready to send out into the world, and there is a buzzy sense of anticipation, at least for us.  Certainly this film has undergone a longer gestation time than any of our other indies by far, at fourteen years in the making and counting.  This is, I believe, attributable to two factors.  The first is that RANDOM LUNACY, SONGS & STORIES, and BLACK 47 AT CONNOLLY’S all had someplace to be at a certain point (screenings, festivals, broadcast possibilities) so we had to feverishly step up the pace and finish ’em.  The other is because our subject, Nenad Bach, is himself an evolving piece of art, and as time went on, has become an enduring friend, so there’s always been more to shoot. 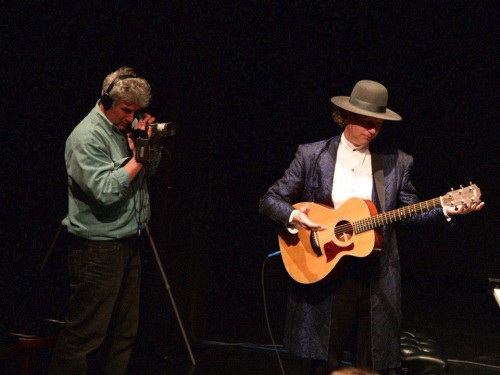 This film will be many things, but foremost is an exploration of human tenacity and determination, traits shared by all artists.  Nenad has been chasing rock dreams for all of his adult life; he left his homeland for his shining vision and he has never given up.

We understand that ethos, Vic and I, a refusal to back down.  Now in editing overdrive, Vic’s not only logging long hours on the documentary feature he was hired to cut, but then he’s burning the midnight oil, a mad scientist at his AVID, well into the night, and on the weekends. 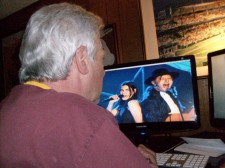 Victor has had his lapses of faith, worried about the lack of budget and high end tools that budgets will provide, and he’s also coped with diabolically punishing tech glitches he’s had to solve via Rube Goldberg-like machinations.  Just hearing about his troubles causes the listener to want to pull out her own hair by the roots.  Trust me, Reader.  You don’t want to know.  Suffice it to say, he keeps solving the problems.  Keeps inching closer to that finish line.

Now, during a chilly, reluctant spring, two big strides forward: A title change.  And a trailer! 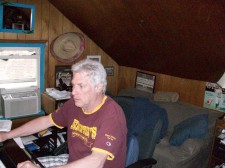 Just like old times, Vic calls me into the edit room to show me stuff.  We’re watching scenes he’s crafted like some magician, taken fragments and made from them a whole, with soul.  At one point, on screen, Nenad is talking about his latest album.  He’s justly proud of it, and he remarks that no matter what, the work is forever.  It’s eternal.  Indeed, that’s what the album is called: EVERYTHING IS FOREVER.

“Vic,” I said suddenly, an idea in my head even at midnight, inspired.  “THAT’S the name of the film, not COMPOSING CROATIA!  It’s got to be EVERYTHING IS FOREVER.”   A quick phone call to Nenad, who agreed wholeheartedly, and a new title is born.

Days later, Vic calls me in again, and he’s got a trailer.  I watch spellbound.  It’s everything.  It’s forever.  Music, life, laughter, love, despair, hope, war, and a dream of peace that will not be extinguished.  Meaning-making.  Our friend Nenad.  Captured on film.  I cry for joy.  Victor turns to me, his face alight.  “I’m in love with this film,” he tells me.  Music to my ears.

Here’s Nenad himself telling us a bit about the making of his new album, EVERYTHING IS FOREVER:

How long was the process of writing and recording?

Fifteen years passed since I wrote EVERYTHING IS FOREVER, and I started to record in 2005, so it was a long process, but…this is my Mona Lisa.

Why your “Mona Lisa?”

Mona Lisa = the best one can do.  I believe this is my best work ever.

Do you have a favorite song on the album?

No, I do not, but I can emphasize a few.  EVERYTHING IS FOREVER, I WILL FOLLOW YOU, VUKOVAR, DAUGHTER’S EYES, ALL I WANT IS FREEDOM, TIME IS ALL WE HAVE.  I have a feeling that my art will outlive me and that is every artist’s dream.

No matter how difficult and complex life can be, I always find the beauty around me.  When I write a song, at that moment I think I can change the world for better, I feel the power to stop all the wars forever.  In reality, maybe not me, but the art in general and specifically a mystical ingredient called music can do this, mobilize people to make not just revolutionary, but evolutionary change in our lifetimes.  I say: World Peace in One Hour.

1 Response to EVERYTHING IS FOREVER