Posted on November 28, 2012 by Stephanie Silber 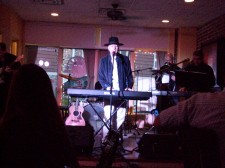 It’s suddenly very quiet at Home Team’s Corporate Headquarters without Vic here; he’s off chasing a dream we’ve both held onto for over a decade.  That dream is nearing its natural conclusion; the completion of a film.  Meantime, I’m watching the status of Delta Flight 8601 from JFK to Zagreb via Paris; it should be wheels up as I write this.  Vic is aboard, as is the subject of COMPOSING CROATIA, Nenad Bach.

Tonight Nenad and his eponymous band (Joe DeSanctis, Richard Lindsey, Michael O’Keefe, Al Orlo) are headed to Croatia for the gig of a lifetime; a concert Friday evening at the elegant 2,000 seat Lisinski Hall, which will be televised live in Croatia.  Vic will capture it all on tape.  Esteemed photographer Zoran Orlic will also be on hand with his sure eye and his ready camera.  See more about Nenad Bach and Zoran Orlic on their websites.

It all began when Vic was editing for CBS’ Street Stories.  He became intrigued by the central figure of a segment he was working on, Croatian expat and classically trained musician/composer Nenad Bach.  Nenad’s anthemic ode to world peace, “Can We Go Higher” was featured in the magazine show story, and Vic was soon to learn that among Nenad’s many other gifts, his activism around ending war in our lifetime and in perpetuity was one of his driving forces.  Small wonder — he’d experienced war firsthand in his homeland.  The activist and the editor were soon close friends.  Documenting Nenad Bach’s inspirational life and musical process became Vic’s mission and a Home Team Productions work-in-progress.

During the run-up to this trip, Vic found himself a little depressed.  He wishes he could be there with a full crew (including me!), preferably armed with high-def cameras.  It’s a glossy event — in a perfect world it should look glossy on the screen; further, in a high tech world, the viewer expects high definition and a slick look.   Vic worries that festivals won’t give the film a shot.

And, importantly, he wants to do our old friend Nenad and the band justice.  I have no doubt that he will.

I’ve been privy to this journey throughout these ten years and counting, though unlike many of our other projects together, this one has Vic’s fingerprints all over it.  I believe this may in fact be the best work he’s ever done.  Hyperbolic?  Maybe.  But the rawness of the film is emblematic of the passion that drives most artists.  Can we go higher?  We can only try, and keep on trying.  If we get knocked down we get up again.  We continue to push the rock up that hill even as the elusive dream seems to remain forever out of reach.

COMPOSING CROATIA will be a testament to that enduring quest for creation, for making meaning during this rugged ride called life.  It will be a searching look at something that in the end looks a whole lot like success.  And that ain’t necessarily glossy.

I can’t wait to see it on the screen.  The big screen.