Posted on November 26, 2012 by Stephanie Silber

It’s finally happened. I swore it never would. I’m not that kind of a girl, I told myself fiercely, and my reasons for holding out were good. By nature, I’m a private person. Opinionated, sure, though more comfortable doing the opining over dinner and a glass of wine or two, with friends and family. But with the world? On a weblog? I thought not.

Then there was the technology aspect. I have to admit it — it’s not so much that I’m a technophobe (which I am; I wouldn’t know an iPad from a smartphone, a text from a tweet), but that I truly loathe the way devices have replaced personal human interaction. You cannot make your way down a city street without weaving and dodging through pedestrians gazing downward at their little screens, typing with their thumbs, oblivious to their surroundings, be it a soft and perfect summer day or an oncoming bike messenger at 35 mph. That’s not me, I’m not that girl! 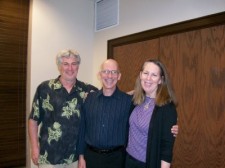 In March of 2009 my partner and I had the wonderful opportunity to screen our film, RANDOM LUNACY: videos from the road less traveled, as part of the Southern Circuit Tour of Independent Filmmakers. We were to barrel through the American south, barely pausing for a change of clothes and a shower, covering eight states and ten cities in twelve days. All expenses paid, a stipend for our time, and a priceless experience. We were asked little other than to show up, preferably on schedule, do a Q & A, and — uh-oh! — to blog about the trip. I was horrified. At one point, since neither of us were tech-ed up, the possibility arose that I, the typist of the two, would be forced to not only BLOG, but to do so on some sort of hand-held device. 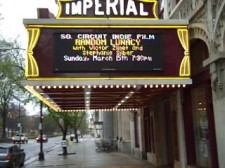 Fortunately, that didn’t happen. In the rare moments we had to catch our breath, we did capture this journey of a lifetime, if not on actual paper, then on our trusty new laptop. And it was fun, for the most part. Here’s a link to that blog, “THE ROAD LESS TRAVELED,” posted by Vic and Stephanie. http://southerncircuit.blogspot.com/2009/03/road-less-traveled.html To view our complete list of blog posts on the Southern Circuit site, click on this link: http://southerncircuit.blogspot.com/search/label/Stephanie%20Silber

So, I am not in fact a weblog virgin. And, I daresay I learned something from my First Time, as most of us do, and I expect to again. What finally pushed me over the edge to enter the blogosphere a second time? I’ve written a second novel. I’m keen to publish it. It’s a process, a long one, an arduous one. Steely determination required, along with faithful belief in the work. I’d like to share the process as I continue to seek representation, my current Plan A. Additionally, I’d like to comment on the artistic process in general when the muse is upon me — not just my own, but the whole often unhappy dissimilar family of people who are compelled to make art, and on the art they make.