We’ve all experienced those times in life that are so excruciating that it seems everything starts to go wrong at once, falling apart like a house of cards.  Lose your livelihood?  Check.  Been double crossed?  Done that.  Living hand to mouth in a turning of the screw, ruinous carny ride that is careening off the rails?  You betcha.

The savings (such as they are) disappearing like a sick sleight of hand.  And all of this happening with no warning whatsoever.

We’re no newbies to misadventure.  As creatives, we know it comes with the turf, and you build a really thick skin as a result.  At a certain point, though, despite keeping the faith and frequent appeals to the Divine followed by a bout of fist-shaking cursing of same, you hit a wall.

We had reached that wall and then some, but when I awoke the Sunday before the Fourth of July with a wicked toothache, I sensed that now we’ve really got a whole different beast to deal with.  I also sensed that it wasn’t my typical TMJ, a condition caused by nocturnal grinding of the teeth; the inflammation there usually is felt in the jaw and ear.  This time it was most definitely in an upper tooth, identified rather too quickly.  As in when your upper (painful) tooth meets your lower, and you jump out of your skin with a cry.

OK, so that gave me something to focus on that seemed FIXABLE for a change.  A bit of wait and see, a quick visit to good Doctor Pain — no just kidding, I love my guy.  DDS did a little tap here, a little tap there, and WHOA NELLY!  Like a sword driven through my innocent chopper.  Dr. S looked from my face to the x-rays gravely. 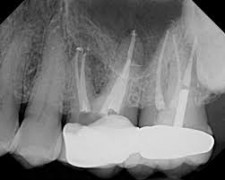 “It’s not TMJ,” he said carefully.  He corroborated what at that point was my worst fear.  “You’re right,” he told me.  “You do need a root canal.”  He glanced again at the pictures, and still studying them closely, said, “The thing is this.  You very likely have cracked the tooth under the gum line.  If that’s the case, you’re going to lose the tooth.”

I was aghast.  This cannot be, I thought hopelessly.  You lose a tooth when you’re six and you stick it under the pillow and the tooth fairy comes and takes it and leaves you a dime or a dollar or whatever, depending on what era you were born in.  Then you find it later in a little box that Mother keeps, along with your kindergarten picture.  You lose a tooth when you are in late teens or early twenties and the biggest deal of your life is beginning and finishing college with a modicum of success.  Those misbegotten choppers called wisdom teeth you do NOT keep.  Anyway, I surely didn’t.

Good Dr. S continued, choosing his words, as he could plainly see the look on my face.  “Listen,” he said.  “We can always put in an implant if the tooth isn’t savable.”  It was then that I realized there is a third stage of your life when you’re gonna lose the ivories.  OLD, that’s when.

So it’s come to that, has it, I thought savagely.  We looked at each other and I knew he was regarding me exactly as I was him.  Over the course of twenty-some-odd years we’ve known each other, wear and tear becomes all too obvious; a little under eye luggage, maybe some gray.  Frown lines a road map of worries and weariness well-earned as you stumble and climb along the highway of life.

“You’ll see an endodontist.  They’ll take out that huge filling and investigate from there.  I’ve arranged for you to see someone immediately.”

He wasn’t kidding.  This all went down so fast my head spun, see above, house of cards.  No time to even think about the expense, much less the unpleasant experience ahead, the whine of the drill in your very skull, the poking and the probing and the prodding.  I was to run, not walk, to his recommended colleague.  I will say this for her: Though she barely

spoke a word, she had a fine hand with the injection process, one aspect of dentistry I am particularly fearful of, and small wonder; when I was a child our dentist used a drill similar to those of professionals who did road work, not unusual in those dark ages.

No fewer than half a dozen shots did she give me, as she expertly wriggled my lips and cheek about.  It was OK, I could deal.  There was no pain, though the injection in the roof of the mouth was, shall we say, interesting?  And not in a good way?  Excavation began, as I mumbled, “I’d almost prefer childbirth.”  The silent assistant looked at me solemnly, shaking her head no.  She preferred, apparently, dental work to childbirth.  Whatever.

I managed to lisp thickly through a mouthful of cotton and gauze and various other implements of destruction, “At least with childbirth you get a good outcome.”

Not in this case, I am sorry to report.

The tooth was cracked under the gum line.  I was to turn myself in to an oral surgeon immediately, preferably before the Novocaine wore off, as we were facing the holiday weekend, and one doesn’t want to risk Something Awful happening with that crater in the dentition.

Then came a slow-mo montage of the usual routine with Vic getting lost on roads that should be familiar, and during holiday rush hour yet, as I whimpered brokenly and he swore terrible oaths and spoke of his resolve to FINALLY break down and get that GPS at last, no matter how broke we get.

And then, there I was, strapped into a dental chair in a bare room that looked like a holding cell.  (OK, so I wasn’t strapped in.  But I may as well have been.)

The boy surgeon entered, all Adonis curls and strapping good looks and friendly smiling manner, which swiftly (and literally) disappeared as soon as he donned his mask.

Then things got ugly.  REALLY ugly.  Essentially, one assistant gripped my head and another handed Dr. Surgeon torture chamber tools that I shut my eyes against, shuddering.  What happened next has now, by day five, become a blur, the sort that occurs in the human psyche after dreadful trauma.  I think my molar was clamped and tethered to a wild mustang stallion, which reared and galloped off into the badlands at the report of a starting gun held near its head.

O Reader, I was not brave.  The immense pressure!  The awful sounds!  (I now realize the 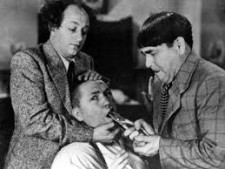 assistant holding my head was also trying to block out those sounds, though the surgeon pointed out sensibly, if hideously, “She’s gonna hear the cracking, it’s inside her head!”)  And, of course, there were the sounds of weeping and pleading (mine, if you hadn’t guessed).

The takeaway, other than the tooth: Next time, if there is a next time, general anesthesia shall be the only option.  Also a little hydrocodone goes a long, long way. 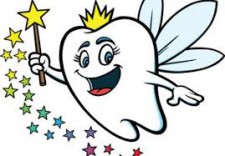 And, oh yeah.  There is no tooth fairy.

13 Responses to TOOTH OR CONSEQUENCES