ONE YEAR OF NO

Posted on February 22, 2013 by Stephanie Silber

This month marks one year of devoting almost all my time and energy to finding an agent willing to rep THE DARK SIDE OF TIME.  It’s interesting to me that the actual writing of the manuscript took a mere seven months door-to-door to complete a first draft.  That said, it should be noted that rewrites and polishing, re-formatting and creating different versions of queries and synopses long, short and in-between also consumed a good deal of time.  The results?  A couple of nibbles.  Some respectful declines, with encouraging words.  And many, many “Thanks, not for us,” form responses.  But there is something even worse than frank rejection; that is, to be ignored.  No response.  Flatline.  Shoo, fly. 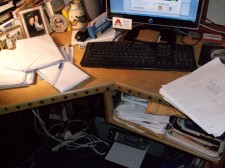 True, my carefully curated list of possible fits for the ms were heavy-hitting, top drawer agencies.  But even with that factored in, the trance of unworthiness creeps up on you.  How can it not?

Here’s what I’ve learned that’s important.  It’s perfectly OK to throw yourself the occasional pity party.  But keep it brief.  When you’ve finished, you need to remember what your own opinion of the work is.  Stand behind it with well-deserved pride.  And then look back at how hard the work of selling is, especially when it comes to your very self.  How tenacious you’ve learned to be.  How brave.

Someone once referred to me and Vic as “cinematic junkyard dogs.”  He was speaking to our experiences in producing our indie films ex nihilo.  No funding.  No backers.  No publicity machine.  NO.  NO.  And NO.

We wouldn’t take no for an answer.  We forged ahead, working our day jobs, working nights, weekends on our own films.  Rolling that rock up the hill.  And we got those films made.  Then we pressed on, sending ’em out to give them life on the festival circuit, only to hear more of the same.  NO.

But then there were some successful submissions.  RANDOM LUNACY  was accepted as

Closing Night Selection at the venerable New York Underground Film Festival.  Simultaneously we were awarded Best Doc at the Westchester Film Festival.  We got to travel quite a bit with the film.  We did Q&A’s with audiences large and small.  It was a heady time.  Exhilarating, because the nature of art requires it to be interactive.

That’s a problem when it comes to staying the course with a manuscript.  I’m grappling with that now.

These digital days, happily, there are options.  I can self-publish.  I probably will, eventually.  I’m researching, considering, exploring.   I’m making notes for the next novel.  Working on short stories.  And so lucky to be reading for audiences — I’ve joined the Irish American Writers & Artists Association as well as Artists Without Walls.  Interaction.  The ecstatic process of hearing and being heard.  Now there’s the Divine Spark.  Like the hand of the Almighty touching the fully human outstretched hand of Adam.

As I write this, I hear a lone bird in the bare branches of the tree outside my office

window.  It is trilling the same sweet note over and over again, and it puts me in mind of spring, and the summer to follow.  My favorite season.  Life.  Growth.  Possibility.  A season of yes.

4 Responses to ONE YEAR OF NO