A recent article by NY Post columnist Andrea Peyser — a rant, really — caught my attention.  Peyser was describing a backlash against the iconic doll, now a venerable 54; it seems the newly minted “Barbie Dreamhouse Experience” has raised hackles in at least one city, drawing topless protestors in Berlin waving burning crosses and calling for occupation of the Dreamhouse.

Granted, said Dreamhouse does sound like a singularly unpleasant experience.  Peyser refers to it as a “shrine to all things pink, sparkly and superficial.”  Think Pepto Bismol fuchsia everywhere, and endless closets.  Mattel, the company which spawned Barbie all those years ago, aims to create Dreamhouses in California, India, and New York, in which little girls may avail themselves of interactive features which, at the touch of a button, can make flowers rise, Barbie’s dog come out of his doghouse, or a pink dolphin pop up from a toilet seat.  The wee visitors can be glammed up by staffers in order to walk a (pink)

runway and strike a pose.  While blowing kisses.  I tend to agree with Peyser.  Really, is this what the world needs now?  Is this the message we want to treat our daughters to?

“Barbie is an idol, totem, and fetish of girl power,” Paglia said.  “Her tiny face is a cartoon of perfect, porcelain femininity, but her hard, long body is armored and Amazonian.”

Leave it to Ms. Paglia, ever the provocateur, to identify female power in a Barbie doll’s body. 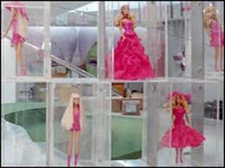 I can’t help but wonder if 54 years of the Barbie ethos hasn’t devolved aspects of our culture in alarming ways.  The emphasis on all those little outfits, the over-abundance of teeny-weeny shoes and perfectly matching handbags results in a vacuous adult female who lives to shop.  And surely those aggressively thrusting Barbie boobs have influenced today’s trend for ordering up from the plastic surgeon the huge fakies women seem to favor, no matter how slight their natural build.

My own perspective on Barbie is somewhat unique: My sister and I were not permitted the doll.  My mother, who had lived and worked in Paris, done a stint as a features editor for a fashion magazine in New York, and was later to acquire a doctorate in medieval English, was an early feminist, though she’d never have classified herself as such.  She found the doll not merely vapid, but unsuitably suggestive and sexualized.  It pissed us off as kids, of course, not having our very own Barbies; but luckily, our friends had many.  You had your Malibu Barbie, Mod Barbie, Holiday Barbie, Barbie with a car, Barbie with her boyfriend Ken.  It was dizzying, this Barbie-palooza, and because for my sister and me forbidden, exhilarating.

Today, I am a woman who actively dislikes shopping (though I do enjoy fashion and a new dress from time to time).  I shudder away from the notion of body modifications.  I get a question mark over my head when I hear about Barbie collectors, who have been known to go broke adding to their vast accumulation of that hard-bodied doll.

I feel not smug, but relieved.  I dodged a plastic bullet.  Thank you, Mother.