A WALK IN THE WOODS

I recently read Cheryl Strayed’s WILD: From Lost to Found on the Pacific Crest Trail.  Now, I love nature writing, as I love nature itself.  But I was peculiarly disinclined to read WILD; a friend had passed along the paperback, and it sat in the book pile beside my bed for over a year. 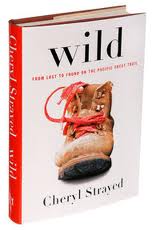 I think my antipathy stemmed in part from a response Strayed had given an aspiring writer on her internet advice column, DEAR SUGAR.  The aspirant’s dilemma had something to do with a friend’s recent success.  Publication achieved?  An agent acquired?  The young writer was having her feelings and wanted to know how to handle her frank jealousy in the situation.  Strayed let her have it, in paragraph after paragraph, with both barrels blazing.  I thought it was, firstly, a bit of an overkill, and further, that the scolding was inappropriate.  OF COURSE the young woman was going to have mixed feelings.  My response would have been just one line: “Go ahead and have your feelings, young aspiring writer, but for God’s sake act appropriately at all costs.”  We as humans often contain a wide range of conflicting feelings simultaneously.  That’s what makes us human.

My reluctance to read WILD could also have emerged from my own frank jealousy.  That Strayed had the balls to hike the Pacific Crest Trail solo at the tender age of 26, and to get a book out of it-!  One that was published! – just knocked my socks off.  Truth is, I wouldn’t have the balls to take on the PCT now, even 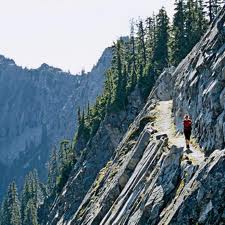 with a wilderness guide along and a fully fitted designer type tent.  Too high up there.  I would love the views, true — who wouldn’t? — but when the trail unexpectedly narrows and the drop is dizzying, I’d freeze and have to be rescued.

But I ended up absolutely loving the read.  Apart from the powerful vicarious thrills, I found it to be nature writing at its sublime best.  For me, that’s when the inner nature is inextricably entwined with the outer, bringing a primal joy and a tease of understanding, a hint of that knowledge around the Divine that mostly eludes us.

And I was left feeling a sense of kinship with Strayed, a satisfying impression of having come to know the writer herself.  It makes things personal. 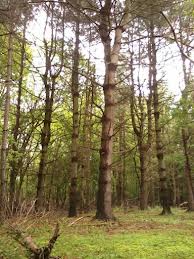 I myself hike every day, in a marshlands conservancy nearby.  It isn’t the Pacific Crest Trail, not by a very long shot, but there are woods a-plenty, and hilly trails, and, of course, the marshes stretching to the surrounding waters.

This morning, a superb walk, as it usually is, like a present just for me.  I had the place to myself.  The woods were sweet-smelling, cool, and bug free.  I saw immediately a single shaft of light pouring at an angle into the forest like a spotlight of the gods.  Then I saw the doe and her fawn, standing in the light.  They stood stock-still on their slender gams, looking at me closely.  I was still as well, crooning softly to the pair, assuring the doe that her freckled baby was the most beautiful creature ever produced in this world.  I told them what I always tell the deer I happen upon during my hikes: “Don’t worry, I’m just passing through your world.”  They listened, and were at peace as I passed them, back to grazing on the forest floor.

On the open marsh, heading out to the rocky neck that butts up against the inlet channel

(the smell of salt, the sea aglint, a lone sail visible on the placid horizon), I spotted what I thought were yellow butterflies, three of them, but a closer look found them to be hummingbirds, skimming the grasses.  Feeding as they fluttered.

That little bit of everyday magic calls for a fragment from Whitman’s SONG OF MYSELF:

I think I could turn and live with animals, they are so placid and

I stand and look at them long and long.

They do not sweat and whine about their condition,

They do not lie awake in the dark and weep for their sins,

They do not make me sick discussing their duty to God,

Not one is dissatisfied, not one is demented with the mania of

Not one kneels to another, nor to his kind that lived thousands of

Not one is respectable or unhappy over the whole earth.

4 Responses to A WALK IN THE WOODS